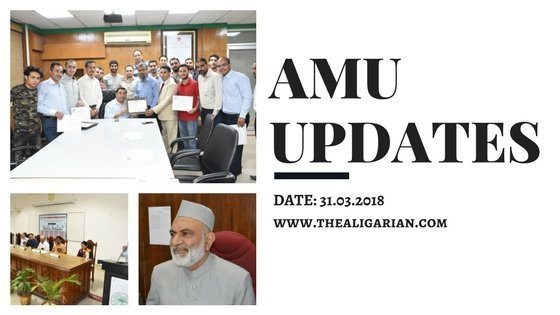 Aligarh, March 28: The Department of Statistics and Operations Research, Aligarh Muslim University (AMU) is providing hands-on-training on SPSS, Minitab, R, Tora, Lingo and Analysis of Sample Survey Data to faculty members and research scholars from the various university departments in a one-week workshop on ‘Statistics and Optimization Techniques using Software Packages.’ The programme will conclude on March 31.
Presiding over the inaugural function, AMU Vice Chancellor, Professor Tariq Mansoor delineated the importance of statistical techniques in the analysis of research data in humanities, physical sciences, life sciences, agricultural science and medical science. He said that this workshop will train researchers from various university departments. The Vice-Chancellor also released the 37th Volume of Aligarh Journal of Statistics on the occasion.
Guest-of-Honour, Prof Mohammad Shakir (Dean, Faculty of Science) appreciated the organisers for arranging the workshop for university research scholars.
Prof Aquil Ahmed (Coordinator) discussed the need for this workshop. He added that statistics and optimization techniques are indispensible tools of modern research in all the fields.Professor Athar Ali Khan (Officiating Chairperson, Department of Statistics) informed that four batches of participants were created as a large number of research scholars and faculty members turned for the workshop. He said that two batches are being trained in this workshop, while the remaining two will be trained in April.
During the welcome address, Prof Qazi Mazhar Ali spoke on the history of the Department of Statistics and Operations Research. “This century belongs to Data Analysis as the machines are being based on artificial intelligence,” he said.
Prof Masood Siddiqui (Jaipuria Institue of Management, Lucknow) and Prof Suresh Kumar Sharma (Department of Statistics, Punjab University, Chandigarh) are the resource persons.
Dr Zubda e Noor conducted the inaugural function.

Aligarh, March 28: As the public health experts worldwide concede that there is a global epidemic of road traffic accidents, a Jawaharlal Nehru Medical College (JNMC), Aligarh Muslim University (AMU) team has started working on a project aimed at decreasing the time lag between crash and arrival at health facility.
Dr Urfi, Assistant Professor from the Department of Community Medicine, JNMC has finally received an approval of Rs 40 lakhs Indian Council of Medical Research (ICMR) ‘Road Traffic Injuries’ project which was submitted in 2016 under the guidance of Prof Najam Khalique, who is one of the co-investigators with Prof Anees Ahmad, Dr Latif Zafar Jilani and Dr Shahbaz Habib Faridi.
Prof Khalique stressed that this study will bring out in depth analysis of road traffic accidents and early rescue of the injured.
Dr Urfi added that project work will identify barriers in providing early rescue to patients and find appropriate solutions.
This project will be undertaken on the case studies of NH-91 and NH-93, which are two important national highways in the Aligarh district. The investigators of the project said that interventions will be applied in the study, which if found successful will aid in decreasing the time in which a person injured in a serious accident reaches a hospital.
They added, independent research so far suggested that road traffic injuries are the ninth leading cause of death across all age groups and it is predicted that by 2030 road accidents will be the fifth leading cause of death all over the world.
According to the Ministry of Road Transport and Highways, Government of India (GoI), 494 624 people were injured in 4,80,652 road accidents in India in 2016. 150785 people lost their lives in the same year, which has decreased marginally to 146377 in 2017. The GoI report also stated that Uttar Pradesh tops the list of fatal road accidents.

Aligarh, March 28: If you are searching for literature on promoting a better understanding between the Muslim world and the West against the backdrop of the deplorable 9/11 tragedy, Professor Abdur Raheem Kidwai’s latest book, ‘Images of the Prophet Muhammad in English Literature’ is a must read.
The book, which has been published by Peter Lang, a leading USA publisher recounts and analyzes the representation of Prophet Muhammad (peace be upon him), as reflected in English literary texts, from 12th to 19th centuries. This book will provide the readers with a comprehension between the Muslim and the Western world.
Prof Kidwai’s book is of much interest to students of English literary history, cultural studies, Islamic studies, and literary orientalism.
Prof Kidwai is a senior academic with the Aligarh Muslim University (AMU) and the Director of University Grants Commission, Human Resource Development Centre, AMU. He has published extensively on the English translations of the Holy Quran, Literary Orientalism and English and Urdu Literature, with more than 30 books and 300 articles and reviews in periodicals to his credit.

Aligarh, March 29: The Department of TB and Respiratory Diseases, Jawaharlal Nehru Medical College (JNMC), Aligarh Muslim University observed the World TB Day—2018 with the ‘Revised National Tuberculosis Control Program’ (RNTCP) in which a training programme and a CME was organised for resident doctors and faculty members.
Inaugurating the programme, Prof S C Sharma (Dean, Faculty of Medicine and Principal, JNMC) pointed out that TB might be dangerous, but it is curable. While urging doctors to actively participate in RNTCP, Prof Sharma added that let us move forward to curb TB.
Prof Zuber Ahmad (Programme Director and Organising Chairman) who is also the Vice Chairman of RNTCP Task Force and TB Programme In-Charge, JNMC said that new techniques such as LPA and CBNAAT are very effective not only in diagnosis of tuberculosis but also in MDR-TB.
Prof Haris M Khan (Medical Superintendent) said that JNMC provides all TB investigations free of cost to patients. He added that JNMC has updated and state-of-art DR-TB ward, LPA lab and CBNAAT lab.
Prof Rakesh Bhargav discussed details of X-Ray diagnosis of TB, while Prof Farzana K Beg (Chairperson, Department of Paediatrics) spoke on diagnosis and treatment of TB in children.
Dr AP Bhaskar (DTO Aligarh) said that the Government of India is committed to eradicate TB by 2025 and soon every TB patient will be given Rs 500 for nutrition and Rs 1000 will be given to the person, who informs about a TB patient.
Dr Amit Pandey (WHO consultant of RNTCP) talked about RNTCP guidelines for diagnosis and treatment of drug sensitive and drug resistant TB.
Dr Ummul Baneen (Organizing Secretary) proposed the vote of thanks, while Dr Imrana Masood conducted the program.

Aligarh, March 28: The Training and Placement Office—General, Aligarh Muslim University (AMU) concluded its third 10-day workshop on ‘Spoken English and Personality Development’ in which Arabs students attending AMU were provided with necessary skills of self-introduction, public speaking, group discussions and interviews.
While distributing certificates of participation during the valedictory function, AMU Pro Vice-Chancellor, Professor Tabassum Shahab said that AMU is dedicated to provide the best facilities, assistance and guidance to the foreign students who are ambassadors of the university in their countries.
The university’s Training and Placement Officer—General, Mr Saad Hameed said that AMU students and research scholars from Middle-Eastern countries such as Jordan, Yemen, Iraq and Palestine participated in the workshop. Mr Hameed was felicitated by Yemini Students Association for his efforts.
Dr Badri, Dr Nabeel and Mr Ahmed Nadeem coordinated the workshop.