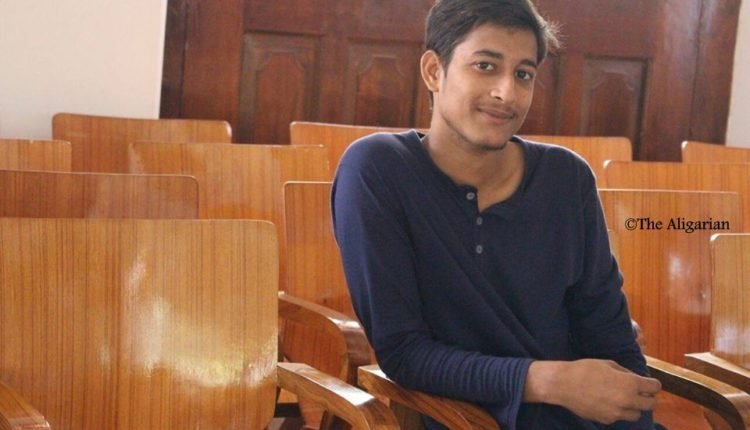 No One From His Village Had Ever Been To College, This Is How Kamran Made It To AMU

“I don’t know where I will be in the coming future. But yes, I’ll be better than what I’m today and what I was yesterday,” believes Mohammed Kamran, a 19-year-old student at the Aligarh Muslim University. Kamran is a smart, savvy and hard-working young man and his belief in himself made me wonder – how many of us actually think about where we want to see ourselves in the near future. I believe, it’s a question everyone should ask themselves every once in a while.

I have known Kamran for two years now, and there is one thing which has remained constant all this while. I have seen him understand and acknowledge his shortcomings and then devote himself to overcoming the same. He is constantly striving to develop himself and be at par with his peers. Kamran and I live on the AMU campus, and we bonded over homesickness and being away from our parents. Before we knew it, we were good friends. Kamran is a student of 11th grade, studying arts; while I am a student of engineering at AMU. During one of our casual conversations, I told him that I was planning to quit college and give up my diploma in engineering. He was quite shocked and that is how I got to know his side of the story, and how much struggle he had gone through to make it to AMU in the first place, the college that I was planning to leave very soon.

Kamran comes from Bhikhampur, a village located on the outskirts of the Azamgarh district in Uttar Pradesh – a place not many people know about. Bhikhampur is not a very developed town and its educational resources range from few to non-existent in many cases. A village with a Muslim majority of the population, it has most families living in poor condition – as a result of which, higher education is often neglected and is rarely an option. Nobody from Kamran’s village had ever been to a college, let alone a University. Most of the boys who grew up with him either stayed in the village or looked for jobs in a gulf country after completing their intermediate education.

Kamran had to convince his parents to send him to Aligarh for coaching for his entrance exam. His parents were not ready and were very resistant to the idea of Kamran wanting to study further. His father, who was then living in Saudi Arabia, wasn’t ready as he could not see any benefit in sending his son to study at Aligarh. Everyone including his parents, his neighbours and his relatives were not supportive of him. It was all very stressful for Kamran and he couldn’t manage to convince them to let him go in the first attempt. The stress took a toll on him and his behaviour became less cordial. He started staying out of his home most of the times and even got involved in many fights. There were times when he was quite close to being caught by the cops. Six months passed like this after which, his mother decided to send him to Aligarh. His father was still not ready, but his brother who also was in Saudi had faith in him and helped Kamran convince his parents. The process wasn’t any easier– since his ‘well-wishers’ had tried their best to convince his mother to not send him. However, after long emotional battles, Kamran did manage to convince, rather force his parents into letting him go.

It was hard for me to imagine how someone had to convince their family for letting one study in a University. I could not help but draw the vast distinctions between the same process of getting into a University for me and Kamran – I remembered how the very moment I had completed my high school, I was sent to Aligarh with a clear warning of ‘not coming back if I failed’. Kamran came to Aligarh, all by himself and made arrangements for living here. He got himself enrolled in a coaching institute, a quarter to live in and a tiffin service for his food. He would wake up early in the morning to attend his coaching classes and would even make sure to visit the AMU campus every day – only to remind himself what his goal was and for what he had fought with his parents and relatives. “The university roads and these beautiful buildings and the whole aura fascinated me to become a part of this,” he said.

On the day of results for the entrance exams, Kamran was back in his village. When everyone found out that he had done well and cleared the exam, nobody – including his parents – was thrilled, as to them, it was just another school that he would go to. His parents could not understand the reason for his happiness but for Kamran, this was one of the happiest moments of his life. His brother, who had been supportive of his decision all along was extremely proud and happy for his achievement and success. However, his struggle didn’t end there. The last time, he was home for vacations, one of his cousins asked him quite an interesting question – “How did you get into the University…any backdoor measure?”

For a long time, nobody in his village was ready to believe that he had genuinely worked hard to compete with forty thousand other students and earn himself a seat at this University.  “They had never tried to study further. They always knew that some job was waiting for them in some middle-eastern country and had their minds made up. I’m happy that my elder brother had faith in me and he sent me to Aligarh to attend the coaching classes. People advised him against it- yet he believed in me and today I’m here,” says Kamran, as he talks about his fellow students from the village.

Kamran has just completed class 11 and is now all set to clear his class 12. His teacher, Mohammad Allam, says, “Kamran has the quality of being a leader and is very helpful to everyone around him. I believe students like him who take pride in what they do are the ones who set examples for everyone.”

Kamran adds, that the place from where one receives his education matters a lot – “I won’t get a bigger mark sheet after passing out from here, that’s not why studying from here matters. All I can say is that had I been studying in my village, I would have been the same ignorant person like before. After coming here, I have learnt what education is and how it changes someone completely; the way we think, the way we talk and the way we work –everything. Only after coming here, have I learnt how government policies affect us or what democracy is and I’m glad to be here,” he says.

There May Be Thousand Other People, But There’s Only One You.