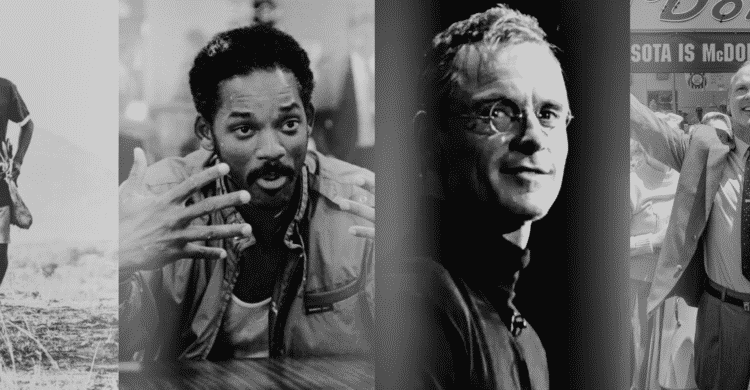 10 Great Movies Every Entrepreneur Must Watch


Entrepreneurs are the people who organize and operate a business(es). And in doing so, they take on far greater than normal financial risks.

Motivational speeches are not everyone’s forte. Many people get inspired through movies and books that don’t motivate right on the face but are relatively subtle. The character’s journey strikes a chord with the audience, and the realistic situations are relatable to a majority. The mistakes, the struggles, and the solutions of the character help us find our way through. Different genres and themes, especially movies, make them a source of inspiration for people from all walks of life.

Here is a list of movies that will serve the purpose to the entrepreneurs or the ones aspiring to be one someday:

This David Fischer-directed movie is about Mark Zuckerberg (played by Jesse Eisenberg) and his journey of creating the social networking site Facebook. This movie is a journey of a nobody from scratch to one of the most successful ventures. The movie is available on Netflix.

With a stellar cast including Christian Bale, Ryan Gosling, and Brad Pitt, to name a few, this Adam McKay-directed movie is a comedy-drama. It deals with the story of a few finance experts who observed instability in the US housing market in the mid-2000s and predicted its collapse. It also follows their research about the flaws and corruption of the system. The movie is available on Prime Video.

This American biographical dark comedy film traces Jordan Belfort’s journey ( played by Leonardo DiCaprio), a stockbroker in New York City, as he takes a hit after a Wall Street crash and then tackles his way up to the top by all means. The movie is available on Prime Video.

Haven’t we all experienced bliss taking over as we bit into our juicy burgers of McDonalds? But who knew the journey behind it becoming the biggest restaurant business in the world. The Founder, directed by John Lee Hancock, takes us through the journey of Ray (played by Michael Keaton), a salesman who met the owner of McDonalds (then a burger joint), realises its potential, and decides to take it far. The movie is available on Netflix.

With it becoming the biggest technological company, every child in today’s world grows up to learn A if for an Apple but picturizes the bitten apple logo. But what went behind creating this multinational company is revealed in the Danny Boyle directed movie Steve Jobs. It takes us to the behind-the-scenes of the digital revolution and paints a portrait of the man at its center. The story unfolds backstage, with three iconic product launches, ending in 1998 with the unveiling of the iMac. The movie is available on Netflix.

As the title suggests, this Gabriele Muccino directed movie starring Will Smith in the lead role is a story of the constant pursuit of making ends meet. Chris has had many professional failures, which leads to his wife separating from him while he is financially broke. All he is left behind with is an unpaid internship and a son to take care of. The story proceeds as he runs from post to pillar to make things work for himself and his son.

Jehane Noujaim and Chris Hegedus direct this documentary. Startup.com examines the troubled state of the Internet revolution, where harsh economic realities and broken promises have supplanted inflated ideals and dreams of instant wealth. It’s sensitive storytelling, and a cinema-like experience is to look forward to.

This is a little different movie that fits almost anybody who aspires to be something. This Peyton Reed-directed movie is a romantic comedy that explores the journey of Carl (Jim Carey), a lonely man with relatively low self-esteem. He enrolls himself in a self-help program that challenges him to say yes to everything in life for an entire year.

This is one of those movies that teaches what a person can do when put in a situation and has no resources by his side but is determined not to give up. Following the story of a 13-year-old boy expelled from his school, his family couldn’t afford the fees. So the boy sneaks into the library and learns to build a windmill to save his village from famine. Directed by Chiwetel Ejiofor, the movie is available on Netflix.

The life and works of Stephen Hawking have inspired one too many people across the globe. This biological movie directed by James Marsh resells his story. A great astrophysics student working on his research, Stephen Hawking learns that he suffers from a motor neuron disease. And has around two years to live. The movie is available on Netflix.

These Professions Get Excellent Benefits From Coaching –