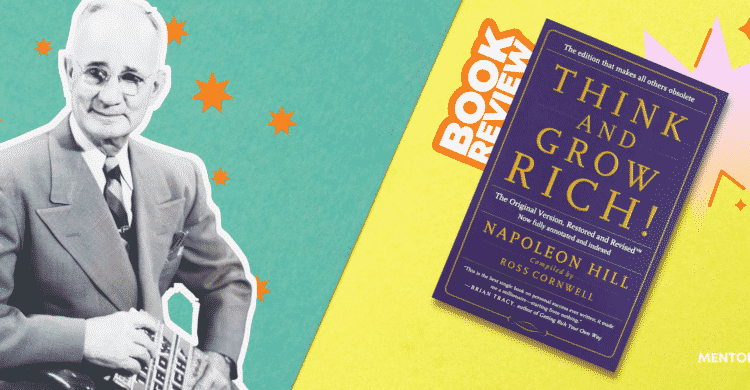 Oliver Napoleon Hill was a self-help author, best known for his Think and Grow Rich book which made it to the chart of Top 10 best-selling self-help books of all time.

Published during The Great Depression, the book emerged to be a worldwide bestseller. Hill claimed that he was inspired by the business magnate Andrew Carnegie, who led to the vast expansion of the steel industry in America, and a significant proportion of the book is driven by Carnegie’s life lessons.

Whenever you look for the Top 100 books to read before you die; Think and Grow Rich book by Napoleon Hill will be visible in most of the lists. And there is a pretty solid reason behind it – Think and Grow Rich is a self-help book comprising interviews with 500 millionaires and successful people including Alexander Graham Bell, Thomas Edison, J.P. Morgan, Henry Ford, and Theodore Roosevelt embedded in it to encourage readers to understand the actions and mindsets of successful people with various backgrounds.

The book was written after meticulous research that spanned over twenty-five years. Finally published in the year 1937, it has almost become an ancient personal development guide.

It is divided into thirteen chapters with each one focused on a theme that serves as a guiding factor in becoming rich.

Hill’s money-making secrets are evolved from the millionaires that he analysed and he asserts that by applying his tenets a person is bound to attain his goals– either monetary, professional, or spiritual. Most of the self-help books we read offer data analysis, steps of investing, knowledge about the market, etc.

Think and Grow Rich detaches itself from the usual self-help books by primarily focusing on the emotional and psychological themes. Read the title and you will know what we are talking about!

Although there is a lot to take from each book and can be interpreted differently by each individual, however, if you are looking for the thirteen principles from the book– we are here for you. Read them and decide if they are enough for you; or if you want to try reading the book once!

13 Principles from Think and Grow Rich

For Napolean, thinking is the most important aspect of success. It is more beneficial than other factors like money, education, and resources. If you think that you are capable of accomplishing it – you are already one step ahead of others.

However, thinking in the absence of other important dimensions is futile. So, here are the thirteen principles that need to be blended with your thoughts to grow a money-making mindset –

Edwin C. Barnes worked with Edison and became a multimillionaire at a young age. In the beginning, he had no money or resources. But he had a desire, a pulsating desire to work with America’s extraordinary inventor Thomas Edison. Hill says, “He left himself no possible way of retreat. He had to win or perish!”

If you want to gain something in life, make it not your wish or your hope but your burning desire. Hill says that if an individual desires to accomplish anything; he must burn all the other doors behind him.

Another great example added by Napoleon Hill is of Helen Keller. She became deaf, dumb, and blind but she never accepted her defeat. Your defeat is not real until you decide to make it your reality.

Everyone initially begins with great fervour to accomplish their goals. However, as they face obstacles and challenges, their faith falters. Every road you take will be crammed with heartbreak, pain, and hardship. If you lose faith in yourself, you have already failed.

Setting goals without faith is like building a house without a solid foundation. For Hill, Faith is an emotion that cannot be compared with any of the scientific concepts. It is the most substantial thing within you– even if on the outside it appears fruitless.

All the suggestions that reach an individual’s stimuli through the five senses are called auto-suggestions. According to Hill, there is a powerful reason behind why we think we do not deserve certain things or end up abandoning goals after a few days.

Since the day we are born, society constantly brainwashes us to believe that it is wrong to wish for things and as a result, we are unable to comprehend that we have the potential to achieve our dreams. Hence, it is important to relax your mind and repeat the affirmations to start believing in yourself.

A lot of people know about different concepts and prepare themselves for their motives. However, they lack the proper implementation of their ideas. Acquiring knowledge is becoming easier with the growth of technology. You can learn about anything in just a few clicks. However, specialised knowledge is a vital factor.

You need to nurture your idea and make it your reality. The ability to implement your idea successfully is more valuable than acquiring knowledge about it. It is a skill that a lot of people do not retain.

Your imagination is another important element. People might mock you for it, but if you use it not for entertainment but to visualise your goals – it can be a big advantage for you.

According to a study, when our creativity stirs our subconscious mind reaches a state where it can be organized more effortlessly.

Want to read reviews of your on-the-list books? Then visit our Book Reviews section.

Every objective should accompany a concrete plan. You should write down all the steps you need to take. Make measurable and realistic goals so you know that you are going in the right direction.

We often make decisions and forget about them the next moment. For instance, you may decide to go to the gym every day; or study every day and end up changing the time or schedule. If you do not believe in your decisions firmly and keep on changing them– there is very little chance that you will benefit from them.

You may fail one time. You may fail hundred times. Many people give up on their first attempt. However, if you want to accomplish big goals– you need perseverance. The dedication you have will keep you going even when it gets tough.

The mastermind group is simply the circle of like-minded people who regularly meet to push each other towards their goals.

An important facet that goes unnoticed- if you truly desire something, then choose your company accordingly. When your thoughts resonate with the people around you, you get motivated to keep going. It is a fact that if you have people to challenge your ideas, you have an opportunity to grow. Moreover, surround yourself with people who are already accomplishing their motives and you will get invigorated as well whenever you meet them.

Although a controversial theme and not something all of us would agree to, to give you an insight- Hill talks about the sexual energy present in all of us through which we attract people and how it can be channelled to help us get what we want by convincing others.

If you had a way to acquire all the wealth in the world and still took a penny, you would be doing the exact similar most people do. Within our brain lies the most extraordinary and miraculous power– it is from here, humans gave birth to the ideas of aeroplanes, mobile, rockets, robots, etc. You have the world’s strongest power– the power of your brain. Hill says that the greater vibrations the brain receives, the higher chances we have to attain our objectives. Our brain is broadcasting and receiving station– that is why the mastermind group influences us and vice versa.

Napoleon Hill defines sixth sense as “that portion of the subconscious mind which has been referred to as the Creative Imagination,” through which “you will be warned of impending dangers in time to avoid them, and notified of opportunities in time to embrace them.”

The sixth sense can be explained only when the individual has experienced it. For example, most influential people trust their ‘gut feelings’ because they have reached the stage of comprehending their sixth sense. The sixth sense has the power to approach our infinite intelligence through which we can access the Universal Mind.

Although, Napoleon Hill is not someone who believes in miracles but he agrees that there seems to be a power higher than the world which can transform things beyond our wildest imagination.

Why Do Tech Startups Fail? 5 Things To Absolutely Lookout For — Mentor Monkey

What Did Global Celebrities Do Before They Became Famous? — Mentor Monkey