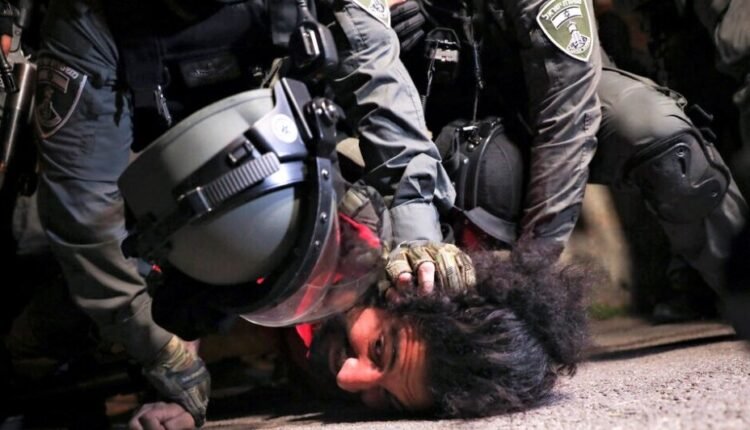 
How did Palestine transformed into Israel.

Palestine was a religiously diverse land where Muslims, Christians, and Jews used to live alongside each other. Palestine was a part of the great Ottoman Empire until the 1900s.
With the start, if Zionist Movement in Europe calling for the establishment of an independent Jewish state ideally in Palestine, the first wave of European Jews start to emigrate. The Ottoman Empire collapsed at the end of the First World War and Palestine was under British rule.

In 1917, the British declare their support for a Jewish homeland in Palestine which is famously known as Balfour Declaration. The number of Jewish settlers started to grow in Palestine which resulted in the tensions between Arabs and Jews. This violence between Arabs and Jews caused Britain to bow out and let the UN takeover. The UN approved a plan to divide Palestine into two states: Jewish Israel (56.5% of land) and Arab Palestine (43.5% of land). The holy city of Jerusalem was then a UN-controlled international zone.
Jewish accepted the partition plan and declared independence as the State of Israel which was confronted by neighboring Arab countries. This became the reason for the first Arab-Israeli war.

Israr was victorious and grabbed the land intended for the Palestinian state under the UN. The land got divided into three parts: Jordan occupied the West Bank and East Jerusalem, Egypt occupied Gaza and the State of Israel took 78% of historic Palestine. This caused 700,000 Palestinians to be come refugees and that day is remembered as “al-Nakba” “the Catastrophe”.

In 1967, a six-day war broke out between Israel and neighboring Arab countries and when the war ended, Israel occupied the whole of Palestine.
Israelis started settling into Gaza and West Bank as the former peace treaty held no control then. Due to this, the Israeli-Palestinian struggle started to take place, which gave rise to the PLO( Palestinian Liberation Organization).

Fighting continued for years and PLO eventually accepted the division of the land between Palestine and Israel but the conflict didn’t end there as more settlers made their way into Israeli-occupied Palestinian territories. The frustration of the Palestinians leads to an “intifada” (uprising) resulting in the formation of Hamas, a political movement determined to fight against Israeli occupation of the West Bank and Gaza Strip.
The United States, Israel, and the PLO sign the Oslo Agreement to split the West Bank into 3 sections:
Area(A): Under full Palestinian control
Area(B): Under joint Palestinian-Israeli control
Area(C): Under full Israeli control
But the solution created a problem, as Area C contains the majority of the West Bank’s agricultural land, water, and minerals. Palestinians had limited access to these. Palestinians lost hope resulting in the 2nd Intifada and Israel started building walls and setting checkpoints to control the Palestinian movement.

In 2005, Israel withdrew from Gaza but continued settlements in the West Bank. Hamas gained power in Gaza and split from the Palestinian authority as they wanted to be known as too secular.
The West Bank and Gaza are now under separate leadership. Israel imposes a blockade restricting any form of movement by land, air, or sea.

Sheikh Jarrah, a Palestinian neighborhood in occupied East Jerusalem.
In 1956, 28 refugee families were provided with housing units in an agreement between UNRWA and the Jordanian government to domesticate them in Jerusalem. Legal titles to the land had to be received by the families within three years but this never happened.

Since Israel seized East Jerusalem in the 1967 war, Israeli settler groups have claimed ownership of the land in Sheikh Jarrah based on local Israeli laws alleging they originally belonged to Jews. However, under international law, the Israeli judicial system has no legal authority over the population it occupies. Since 1972, many lawsuits have been filed by settlers demanding the eviction of Palestinians from the neighborhood.
In 2002, 43 Palestinians were evicted from the area and Israeli settlers took over their properties. The Hanoun and Ghawi families were evicted in 2008. In 2017, the Shamasneh family was evicted from their home by Israeli settlers.

A ruling by Israeli courts would see Palestinian residents be evicted and replaced by Israeli settlers. At least 13 families (58 peoples including 17 children) were ordered to leave their homes between May and the start of August 2021 by an Israeli District Court. These 13 families will be forced to leave their generations-old homes. Solidarity sit-ins & protests are being carried out in Sheikh Jarrah this year to attract international support for Palestinian rights and to prevent more families from losing their homes.

On 7 May 2021, the last Friday of Ramadhan, some protests were being carried out by Palestinians against the eviction of Palestinian families living in the Sheikh Jarrah neighborhood of East Jerusalem. Israeli police dispersed the protests using water cannons and pressurized water. As it was not enough for Israeli force, they broke into the holy mosque Al-Aqsa‘s prayer hall. Police threw shock grenades inside the al-Aqsa mosque.

Israeli forces claimed that Palestinian militants from Hamas have fired more than 2,900 rockets into Israel of which defenses have intercepted roughly a third through their iron domes.
In response to this, 42 Palestinians were killed, dozens wounded, and at least three residential buildings were flattened as the Israeli military launched intense raids on the Gaza Strip.
Since the violence began a week ago, 192 peoples have been killed including 58 children and 34 women.
10 deaths, including 2 children faced death in Israel.
Israel bombed several government buildings in Gaza and demolished a media building in Gaza housing Al Jazeera and other international media outlets.

Protests are being carried out worldwide in solidarity with Gaza and Palestinians and to condemn the violence.