No Result
View All Result
Home The Second Angle

Is Ramdev Modi’s Propaganda Tool? History Of People Following Godmen To Their Ruin – The Second Angle

by The Aligarian Desk
in The Second Angle
Reading Time: 5 mins read
0

These are the words of one of the most well-established Godmen (Indian religious celebrity) in the world: Baba Ramdev; in an interview with Zee News on 6th September 2013. For a person who claims to have completely shed his short-lived curiosity in politics, Baba Ramdev, sure appears as a spokesperson of the Narendra Modi led BJP government on a little too many Media channel interviews.

He seems to have a special relationship with the Prime Minister of the country, in fact, it is so hearty that on being asked to opine on the new Farming reform laws by ‘kanak news’; his advocacy for Indian Farmers stood quashed in front of his blind faith in Modi’s intention, saying that Modi ‘has no ties with giant MNCs’ and thus would never want to taint farmers’ interests. And supposedly, Modi Ji is just displaying his fondness for the Yogi by not calling out his recent baseless accusations against allopathic medicines even after IMA more or less begged him to do so. The Yoga guru has a cult following in billions, both in India and abroad, even though India is the birthplace of Yoga as a discipline, people rarely included the practice in their daily routines deeming it to be rather challenging for non-learned folk.  All of this took a sharp turn when a spiritual TV network called Aastha TV came across Baba Ramdev’s and his ‘partner in yoga’ Balkrishna’s simple yet effective Yoga Techniques for amateurs and made both of them rise to unfathomable fame, within and beyond the country’s borders.

I think it will only be fair to view Baba Ramdev as the same catapult for Narendra Modi’s popularity as Aastha TV was for him. Even prior to BJP winning the 2014 elections, the Godman was heavily insisting on the extraordinary capabilities that Modi Ji possessed as an individual and a leader; his massive cult following coupled with Modi’s own, sky-rocketed Narendra Modi’s popularity and helped him win the 2014 elections.

On several media platforms, Ramdev has discussed how Modi can and will transform the face of India’s economy by uprooting existing institutions and how he is the spine of the entire party. But does his support bud solely from economic well-wishing or are there other fairly clandestine reasons? Although he has commended Modi on his economical feats, Ramdev appears to lean more towards his far-right religious expeditions.

Coming from a  marginalized Hindu background himself, he presents himself as a staunch condemner of each and all kinds of discrimination (except that against homosexuals since he is a self-professed homophobe), he asserts that all Indians belong to one culture and one God, doesn’t matter what faith they originate from and therefore, everyone is equal.

However, the culture he professes is suspiciously centred around the Vedas and Hindu scriptures and while he is quick to denounce Islamic leaders who put the welfare of their religion before the well-being of the nation, he has not shown the same attitude towards extremist Hindu associations such as the Rashtriya Swayamsevak Sangh or RSS who openly propagate their agenda of ethnic cleansing for India in the interest of Hindus and Hindu religion, furthermore, rumour has it that Ramdev is a soon to be the poster boy for the Sangh and might even contest elections with its backing. 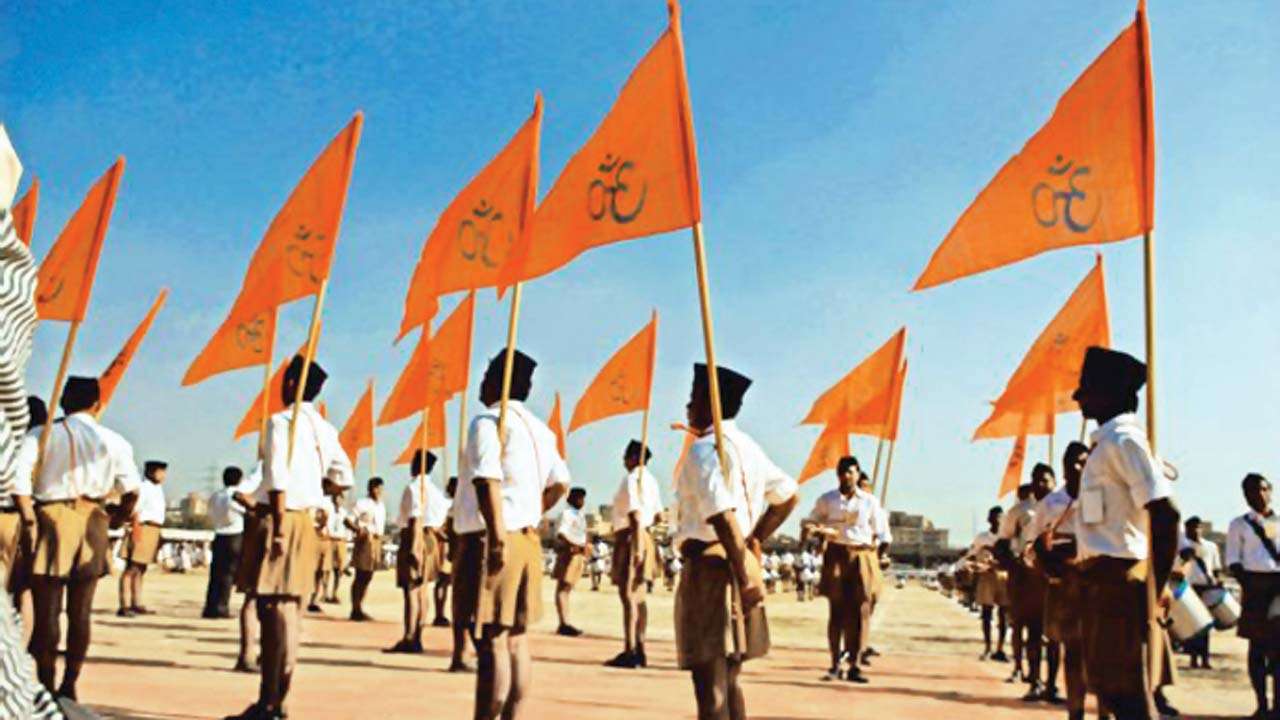 We as a country have repeatedly made awful political decisions and have given the reins in the hands of self-proclaimed flag bearers of religion donning saffron and white loincloths.

Why ‘Saffronization’ is a real problem is not just because what saffron as a colour symbolizes for the Hindu religion, it is also because of how easily we come to trust any man swearing life-long austerity when he has saffron clothes on him; believing that these creatures have all the answers for a prosperous life in the mystical land of India just because they claim to be Godsend and in perpetual communication with God.

Be it, Adityanath Yogi, in Uttar Pradesh, Sadhvi Pragya in Madhya Pradesh or Baba Ramdev in Uttarakhand, we are letting these Goon-men puppet us as and however they wish to. Where does our rationality and practicality drown when a man swears a life of austerity and chastity, claiming he and his partner do not accept a salary from their company and yet somehow lives in a palatial house with the 2nd highest level of state security in Haridwar? Factually speaking, sales by his brand ‘Patanjali’, his Yoga camps, and other establishments like the Patanjali Yogpeeth Research Institute in Haridwar, Baba Ramdev has an annual turnover of more than 2000 crores.

This is the same man who declared himself an ascetic with ‘an apolitical life and no wife’ in an NDTV interview last year. And we conveniently believe in his ‘pure’ character and ‘selfless’ intent for our country because of his endorsement in piety and having a holy purpose. These opportunist individuals- with no understanding and/or education about what initiatives would lead to the holistic development of the country- will for their personal aids and propagandas transform the political and social map of India in the name of spiritual and cultural progression and lead the country and its citizens into havoc if nothing worse.

Religion should be a personal part of an individual’s life and we have foolishly made it as public as it can be by choosing leaders that turn every issue into a communal one. By letting our country turn into a theocracy, we are not only moving light-years back in time but also proving to the western world that we indeed are the primitive, ever-rioting beings that they vouched for us to be. That sort of humiliation would not mean much had it not been true for the most parts. We all have the tendency to put our personal beliefs on an ethical pedestal without any consideration of the consequences. This need to safeguard our religious beliefs has been sown so deep in our brains that we completely forget to spot the big fat line between protection and aggression and doom our own selves either by fighting endlessly to satisfy century-old grudges or by electing parties to power who would forevermore make us do the same for their political gain.

We have already grown out of the high time to let it dawn upon us that religious salvation alone is not enough for a developed and peaceful world, but in this case, the latest is still better than never.

How To Become An Effective Career Coach? – Blog

Devendra Fadnavis And Eknath Shinde Have Similar Hostilities With NCP And Congress, But Different Political Aims — The Second Angle