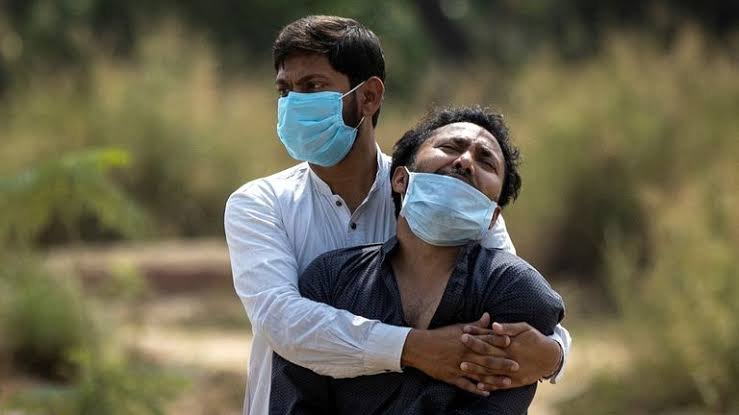 
BJP parties in many states Hide Covid-19 Deaths rates.. It is highly Dangerous for the healthy survival of our country India

Is it right to say that BJP party has a hand on the false death rate reports which are shown to us?

A highly contagious genetic variant of the coronavirus that infects the country, the five scientists who are part of the forum told Reuters.

Without warning, four scientists say the federal government did not want to impose greater restrictions on the spread of the virus.

Tens of thousands of farmers, meanwhile, continue to camp on the edge of New Delhi complaining about changes in the country’s agricultural policy which was newly found by our prime Minister.

The second most populous country in the world is now struggling to find a second wave of infection more severe than in the first year, which some scientists say is accelerated by a new and new species that was first discovered in Britain. India reported 386,452 new cases on Friday, an international record.

Going through several media reports, the death toll is currently much higher than officially recorded.

Reports suggest that the death toll in some cities is nearly 10 to 15 times higher, according to cremators, municipal officials and other local authorities.

Whether this death is due to Covid-19 or not, we do not know either way.

As India’s health minister says the death toll from India’s Covid-19 is among the lowest in the world, what was found was really surprising.

The number of deaths in all of these of six cities which are – Patna, Kanpur, Jamnagar, Morbi, Rajkot and Porbandar – Gujarat, Uttar Pradesh and Bihar between 30 to 40% or 40 times higher than the official death rates.

What are the consequences of such large data spaces in the midst of a widespread epidemic, in the near future Indians trying to understand how much we are affected.

Now what we see in the long run scientists and researchers are trying to mimic and predict Covid -19 follow-up cases to inform future public responses?

How do public health professionals try to make a case for answers about infrastructure, health and health facilities, with those information gaps in the system?

And what finally, what can India do to fix this, be it at the policy level or in practice or using technology in development?

There is a lack of coronavirus testing. No one will be tested! So our district government numbers are not right at all, “he told NPR over a phone call from his home district.” If you can get tested, the results come in five days. “

By then, some of them are gone – burned on the banks of the nearby Ganges River.

The suffering of this city is not uncommon. Across India, there is a shortage of testing equipment, hospital beds, medical oxygen and antiretroviral drugs as the second wave of influenza kills the health infrastructure.

The country was breaking daily world records with new charges. On Friday, the Indian Ministry of Health confirmed 386,453 infections – more than any other country on any day since the epidemic began.

Part of the reason for the large numbers in the Indian population: almost 1.4 billion people. The rate of known coronavirus infection per person is still below the most tolerant United States.

In India, there have been nearly 19 million known illnesses since the outbreak, or about 1.3% of the total population – compared to more than 32 million, or about 10 percent of the U.S. population.

A large number of patients have already undermined the health system in a country that pays less for public health – just over 1% of gross domestic product – than its many peers.

Instead, many are said to be caused by critical circumstances despite national guidelines requesting to record all suspected COVID-19 allegations, even if the patient had not been tested for the virus.

For example, New Delhi officially recorded the deaths of 4,000 COVID-19 people on August 31, but this does not include suspected deaths, according to data obtained by The Associated Press under a request for information. It has been reported that the number of people killed has tripled to more than 14,500. Officials have not responded to questions about whether the suspects are being included now.

In Lucknow, officials say 39 people have died of the virus in the city on Tuesday. Suresh Chandra, a worker at the Bhaisakhund fire station, he said his team had burned 58 COVID-19 bodies on Tuesday evening, and another 28 had been burned at a nearby crematorium that day.

Ajay Dwivedi, a government official at Lucknow, acknowledged that some of the bodies had been cremated but said that they included the bodies of others from other states.

In January he bragged to the World Economic Forum that India’s success was incomparable.

At the heart of these statements was questionable data forming policy decisions.

Information on whether people are infected and dying could help India better prepare for the current increase, said Dr Prabhat Jha, a pathologist at the University of Toronto who has studied deaths in India.

But survivors, funeral directors and scientists say the actual numbers of infections and deaths in India are likely to be higher than the reported numbers.

Opposition BJP has accused Congress’s government Bhupesh Baghel of “deliberately suppressing Covid’s data to save his image”, but the government dismissed the case, saying it was all “open talk”.
, BJP State President and Antagarh MP Vikram Usendi said the Chhattisgarh government was following a West Bengal model to hide Covid details, and accidents were happening as a result.

According to official data, as of May 13, the state had only three active cases, which in the past 10 days has now risen to 110. The state has a total of 172 cases. The remaining 62 patients recovered returned home, data showed.

Officials responsible for the Covid outbreak in Chhattisgarh told The Print that most of the 110 active cases were immigrant workers returning from the state from across the country.

What Are The Best Jobs For Introverts? – Blog – Mentor Monkey

What Are The Career Options In The Media Industry? – Mentor Monkey