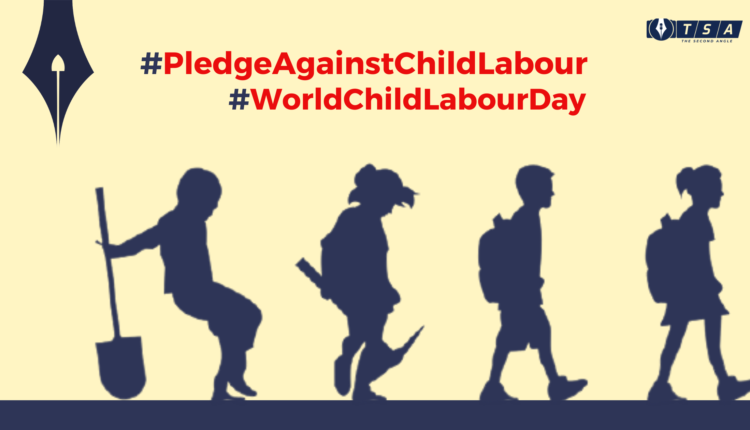 
The 12th of June was designated as the World Day Against Child Labor in 2002 to raise awareness and unite efforts in the fight against child exploitation.

Nearly one out of every 10 children in the world works as a child labourer. While the number of children engaged in child labour has decreased by 94 million since 2000, the rate of decline has slowed by two-thirds in recent years.

Target 8.7 of the UN Sustainable Development Goals asks for the abolition of all kinds of child labour by 2025.

Many child labourers in India work in textile mills, helping with carpet manufacturing, or doing backbreaking work in brick factories and quarries for pitiful salaries.

Other juvenile labourers work for the tobacco business, peddling “Bidis” cigarettes on the street. In businesses including steel extraction, gem polishing, and carpet production, children are also exploited as inexpensive labour.

Child trafficking affects a shocking number of girls in India, whether by customary bonding or organised criminality.

Commercial sexual exploitation of minors is one of the most heinous types of child labour, with an estimated 1.2 million children in India exploited.

In 1993, the Indian government passed legislation forbidding harmful labour or activities that might affect girls and boys under the age of 18.

Understanding the severity of Child Labor

Humanity loses its way for the sake of cheap labour, and we witness youngsters being exploited on a regular basis. Rugged clothing and shattered grins are far too frequent, and innocence is shattered much too quickly.

We turn a blind eye to the 10-year-old child who serves tea in dhabas and never consider his future prospects. Every child has the right to an education, yet those who are less fortunate continue to be churned by the world’s wheel.

Child work has a demonstrable detrimental impact on a child’s development and future prospects. The first is that it puts their health at risk.

Working with dangerous machinery, in extreme heat, and in the presence of poisonous chemicals has bodily implications.

Children who are exposed to this form of labour are at risk of serious and even fatal injuries. Brain injury is more common in pesticide- and toxin-affected surroundings.

Malnutrition is also frequent among children who work as labours

Child work has psychological consequences that should not be overlooked. Depression, drug addiction, PTSD, and other mental health problems are all too widespread.

While there is little study on child labour and health, the evidence that is available demonstrates that it has deleterious effects.

How To Know If A Film Production Career Is Right For You? –