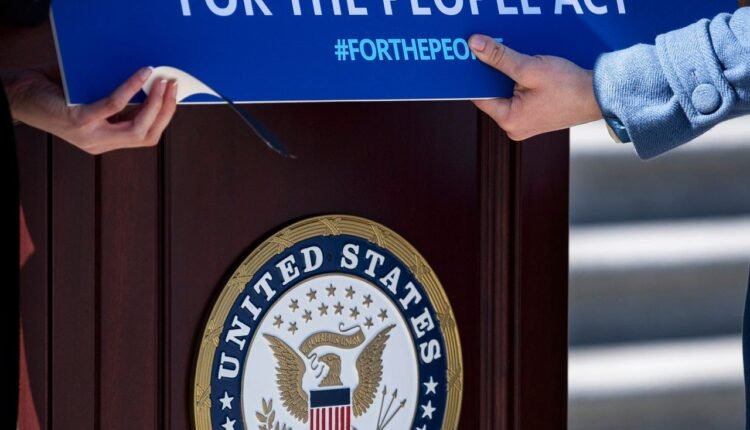 The For The People Act- A Democracy Amendment – The Second Angle


Although, democracy is precious yet it is fragile as stated by President Biden in his inaugural address. The H.R 1 bill is the current hope for democracy to flourish.

Free and fair elections are the pillars and true representation of democratic institutions and to maintain it, a transformative change such as this bill is a necessity.

The H.R. 1/S. 1 bill, also known as The For the People Act is a bill in the United States Congress that intends to strengthen democracy by limiting unfair electoral practices.

It focuses on limiting the unethical practices in politics, imposing moral conducts on federal officeholders along making voting available to a larger fraction of Americans. The key focus of this bill is to create an accountable and fair government that runs according to its citizens.

This bill was originally introduced in 2019 by John Sarbanes but it was blocked in the Senate under Senate majority leader Mitch McConnell. This bill was then reintroduced by 117th Congress on 4th January 2021. This bill is further passed in the House of Representatives on 3rd March 2021.

The bill acts as a reform for American citizens to ensure that each of them has a say in the decisions that governs their life.

A majority of Americans support this bill since they have been continuously suppressed by Donald Trump and his allies including severe racism discrimination.

Since the bill stands firmly on the principle of democracy, “for the people” apart from President Biden, the majority of Democrats, civil rights organizations, and liberal political commentators are in favor of the bill while the Republicans strongly disapprove the legislation by calling it a “one-sided power grab.”

It acts as a countermeasure against an array of other republican legislatures passed recently which were meant to restrict voting rights.

This bill gives the voters a choice of registration ahead of the schedule, as well as same-day and automatic registration thus avoiding any voting restrictions. Apart from this, it facilitates voters to send their votes through a third-party system via mails.

The rules imposed under this bill deal with the three government branches. Beginning with the apex of law, Judiciary, then the legislative, and further, the executive.

Under this law, the president, vice-president and related officers are to disclose their tax returns of ten years. Information regarding fundraising, campaign expenditure, and involvement of foreign nationals is also to be disclosed under this bill.

The bill has been painted as a color of hope to maintain the integrity and credibility of democracy in America by the Democrats while the Republicans have considered it as a threat.

As far as the bill has been portrayed, it serves to improve voting access, promote integrity and security, fortify ethics law, guarantee disclosures and ultimately emphasize empowering citizens.

This comprehensive approach of the bill makes it a necessity for the bill to be made into a law for the benefit of the American citizens. It is a roadmap to an extensive, distinct, and unbiased democracy.

Is A Career In Web Development Really Worth It?