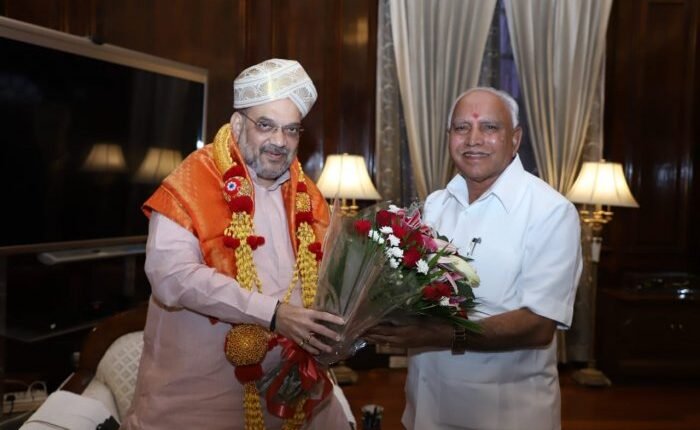 The political landscape in India over the past few days has been completely occupied by the reshuffling of chief ministers in several states. From Uttarakhand to Punjab, as the upcoming elections get closer, it seems like a trend of wholesome changes that the political parties have hopped on. With new faces being introduced and incumbent faces showed the door, the build-up to the upcoming state elections is nothing less than a thriller movie. But what has been striking in the recent political events is how bi-partisan they have been.

Two parties coming from the opposite ends of the spectrum have taken almost similar decisions and in an eerily similar way as well. Now if we go by the Indian constitution and even the internal constitutions that various political parties have, they enforce the need for basic and effective internal democracy in the party where every voice matters and is duly heard. But what has unfolded in the last few days suggests otherwise.
Let’s first take the easier example, of the Congress party. Now there are very few (almost none) political analysts who will tell you that Congress has managed the situation well in Punjab. The chaos that has unfolded in Punjab has been brewing for a few months, with the new entrant Navjot Singh Sidhu taking on the former chief minister Capt. Amarinder Singh. And their differences have been quite evident in the public domain, with both of them vocally condemning each other on various platforms. Now ideally what should have happened is that the party’s leadership would have been able to resolve the issue without creating any further mess, keeping both the individuals contended with their actions. But what has happened is quite the opposite. With the party high-command (essentially the Gandhis) aggressively backing Sidhu and almost abandoning Capt. Amarinder has left the party quite bruised in the state.

And with the elections being so close, it can be a dangerous place to be in for the incumbent Congress. The outgoing chief minister is publicly criticizing the party’s head of the state and opposing his say in the party’s affairs in every possible way. This can be understood to an extent as the party high-command has handled Captain’s farewell quite poorly. To replace a senior leader like him is not easy, but it could have been done better if the leadership had paid enough attention to the storm that had been gathering on the horizon over the past few weeks. But additionally, the selection of the new chief minister is what has been more interesting. The Congress party has been accusing the BJP of the fact that how the party’s major decisions are taken only by a few individuals (a couple, specifically), and there is no real democracy that exists within the party. While that can be true, what has happened in Punjab has shown that the Congress party is not much innocent either. As soon as the announcement was made that Capt. Amarinder is resigning from the post, the party categorically said that the new chief minister will be decided based on the decision that the MLAs will take after deliberation. But after a few hours, a statement was released from the party that the MLAs have unanimously decided that they want the Congress President Ms. Sonia Gandhi to decide on their behalf who their new chief minister should be.

Now the thing is, any rational person would notice the obvious flaw in this stance. If the party says that the MLAs will collectively decide, the MLAs can’t just pass over their right to a single person. This is not how decisions are made in a democratic setup. Congress can not accuse other parties of lacking internal democracy one day and go on to sabotage that itself within its party the next day. That is plain and simple hypocrisy. The party leadership has appointed Charanjit Singh Channi as the next chief minister, who is the first-ever Dalit to hold this post in Punjab. We can never know if the MLAs even wanted him to be their leader. All they appear to be doing is obeying what has been told to them by the people at the top. Although the post has been filled again, the crisis seems to be far from over. With voices of revolt simmering in the party’s state unit, it gives even more leeway to the party’s high command to enforce its will while crushing the sentiments that individual MLAs might be trying to express within the party.
Then there’s the case of the BJP. It is one of those parties that claim to have robust democratic mechanisms within itself and boasts its structure as the antonym of the high-command culture of the Congress Party.

The party has changed its chief ministers of the state of Uttarakhand, Karnataka, and Gujarat. The shuffle in Uttarakhand has been one of the messiest for the party, as it had to revise its choice a couple of times. But if we closely observe what has happened in the state, it is quite evident that the party’s high command initially decided to anyway go ahead with a person who did not enjoy much support in the party’s state unit. Tirath Singh Rawat, being the initial choice of the party, proved to be quite controversial in his short-lasting term. His irrational statements regarding the Kumbh Mela became a talking point on various national news outlets, contradicting the party’s national stance on the issue. The party realized the mistake that it had made, and decided to change the state’s chief minister once again. Pushkar Singh Dhami, the latter choice of the party, is currently the state’s chief minister. This game of snakes and ladders might have proved to be quite interesting for political analysts, but it showed how the BJP’s high command decided to bypass the state unit and decided their leader on their behalf, not once but twice. Says much about internal democracy within the party. The party has faced similar challenges in Karnataka and Gujrat as well. In Gujarat, the entire cabinet has been changed. The new chief minister is a first-time MLA, who hardly has any solid base within the party’s state unit.

But since the decision has come from the top, even the outgoing ministers are endorsing the new cabinet and thus obeying what their masters have said. Although, to its credit, the party has handled the post-shuffle mess much better in Gujarat and Karnataka.
So, it is no more a secret that words like “internal party democracy” are now just phrases hidden somewhere in party constitutions. To raise a voice within the party is a thing of the past. Decisions now come from the top, all that the ground soldiers need to do is quietly obey. And what’s quite intriguing is that both BJP and Congress go hand-in-hand on this front, a rare sight in itself.

5 reasons Why history is important?

The Ridiculous History Of Advertisements And Religious Sentiments Getting Hurt – The…

The Ridiculous History Of Advertisements And Religious…