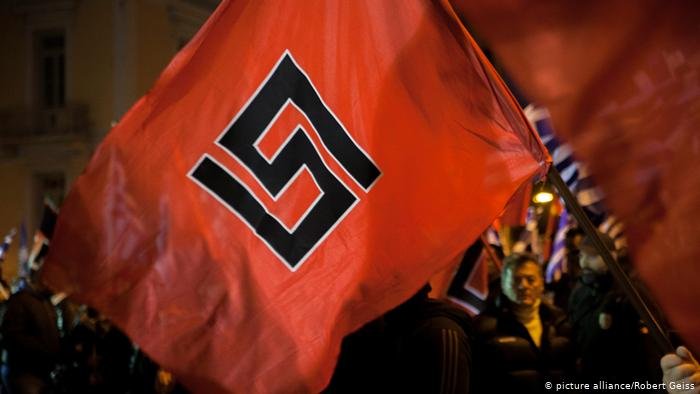 
Founded on 1 January 1985 by Nikolaos Michaloliakos, Golden Dawn is a far-right, ultranationalist political party in Greece. It began as a violent neo-Nazi street gang and eventually gained prominence.

In June 2012, it became the third-largest political party by popular vote in Greece.

This was accompanied by acts of violence and hate crimes against immigrants, political opponents, homosexuals, and ethnic minorities.

Much like any other far-right fascist political party, Golden Dawn thrived on Others.

They promised to drive away from the immigrants, and increase the employment and income of the natives. This was welcomed by the youth and fascism grew in Greece.

Such was the love for Nazism in this party that they actively used the Nazi salute. Even their flag looked similar to a Nazi swastika, even though it was supposed to be a Greek key symbol.

Basically what this party was good at doing was that they picked up someone from the streets, a nobody, an unimportant person with a hunger for power.

They instigated these people with fascist ideas and created monsters out of them.

Golden Dawn gained momentum after the 2008 financial crisis. Unemployment saw the highest rates as Greece lost 25% of its GDP, the people and the youth, in particular, grew angry over the current regime.

Golden Dawn, on the other hand, promised jobs to the native Greeks.

Organizing Greek-only free food distribution, demonstrations, and a promise to exterminate the pests that is the immigrants seized the popular imagination and their power grew.

The native population is over 90%. The majority loved Golden Dawn and they created in their fear from the religious and ethnic minorities. This was textbook fascism and the people played right into it.

The entire world is seeing a right shift with most countries electing far-right political parties.

This trend is already visible in the Americas, in Europe, in West Asia, in India. What this signifies is that people are not satisfied with food, shelter, and clothing.

There is a need for more, a more primal need to be superior and to maintain the status quo, to be fittest in the land and not be threatened.

This primal instinct of belonging to the superior race has now transmuted into fascism and a growing trend is a simple indication that education is not an answer to it.

What seemed like forever for Greece, however, changed with the murder of hip-hop artist Pavlos Fyssas, known as Killah P, who was stabbed twice following a brawl in Piraeus.

However, this was not their first violent undertaking. They had assaulted an MP from the communist party during a live debate on television and attacked numerous immigrants often in cooperation with the police.

What was different this time was that Pavlov was white, he was a man, he was Greek.

Thus this attack was seen by the majority as an attack on “us” and not “them”. They acknowledged fascism only because it came knocking on their doors.

Even though this incident eventually led to the imprisonment of the leader of the party and their eventual downfall, we must remember how it is a chilling tale of people’s indifference to cruelty against others.

How they cared only when it was one of the majority, it was someone famous and someone powerful.

How everyone shut their eyes when it was the minority being lynched.

Lessons from this incident are more ominous than ever before with the current fascist trend in the world. We need to open our eyes and be compassionate to our fellow human beings.

Why Is Aptitude So Important To Get A Job?