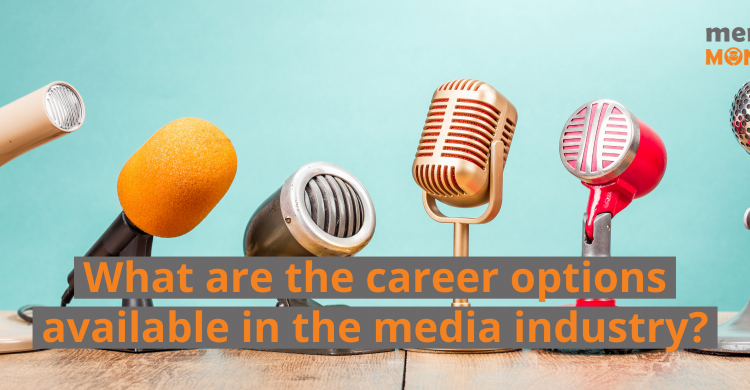 What Are The Career Options In The Media Industry?


When you hear the word ‘media’, you may generally link it with news channels running on your television– or simply the job of a journalist. However, media (plural form of the word medium) refers to a thing that acts as an intermediary between two things.

Television is not the only example of media– movies, the internet, newspaper, radio, etc. Are all forms of media. The jobs in the media industry swivel around managing several features of media. It has a wide range of jobs from local news anchors to film directors. However, people in this field usually choose the kind of job (like in the film, social media, or news channels) suitable to their skills and personality.

Nevertheless, it is possible to pick up more than one job – like writing in a newspaper, then moving on to writing and editing a book or hosting a program.

So, here are the 5 career options available in the media industry –

Both editor and writer are the jobs focused primarily on mastery in a particular language supported with skills including creativity and imagination.

Writing in the media industry varies from writing in a newspaper for a specific genre, content marketing, and even composing a screenplay in the film industry.

An editor accompanies each of these jobs whose responsibility is to look after the scripts penned by the writer to assure that they fulfill the degree of quality required.

Editors within this vocation have a job of proofreading to maintain the standard needed and look after what the readers are interested in. The numerous jobs available are biographer, copywriter, copy editor, digital media specialist, technical writer, editor, assistant editor, author, etc.

Advertisement and marketing are another two careers accessible in the media industry. With the advancement in technology, the value of advertisement has increased tenfold. Conventionally, radio, newspaper, television was the only source of advertising.

But in this decade, social media, digital billboards, magazines have evolved and are increasingly becoming famous across the world.

Advertising is a significant source of revenue for various media. Be it news channels, newspapers, magazines, social media platforms– ads reimburse a substantial part of income to the medium.

Journalism is more of a mainstream job in the media industry. Journalists need to have a profound knowledge of the issues that they are covering so that they are capable of providing an impartial report to the audience.

Present-day journalism encircles a wide variety of platforms and viewers. In earlier days, newspapers were the primary source of journalism. Now it has moved a long way– Facebook, Twitter, and YouTube prove to be excellent platforms for journalists to practice their skills.

Event management can be a tough job for those who are not acquainted with the proper planning of occasions. It requires training equipped with financial expertise.

The job could be pretty stressful with a lot of time and effort mandated to plan the event as per the client’s requirement. Planning several types of events like fairs, exhibitions, seminars, etc., needs exposure.

Photographers work for several firms stretching from newspapers to advertising agencies. A lot of photographers may deter full-time employment in the field and often go for freelancing or self-employment.

It means they may change clients from time to time, bidding for projects they find intriguing. The task of a photographer is not just capturing photos. They need to see the perfection of composition, angle, and light to capture the perfect photograph with such elegance that it instantly grasps the viewer’s eyes.

What Are The Career Choices For ENTP People? – Blog