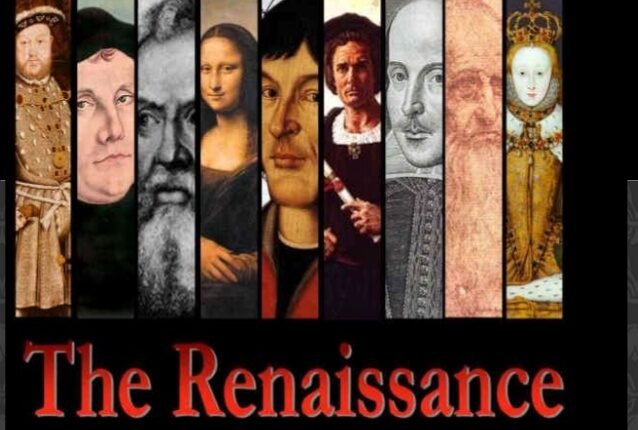 
Renaissance, a period whose exact date cannot be determined anywhere in history, but believed to begin from the 14th century and existed till the end of the 17th century.

As its name suggests, there was a rebirth in European cultural, economic, artistic, and political fields during the period. It was the renaissance period whose amenable to bring the modern age to the middle ages.

Renaissance – From darkness to light.

As vivification, There was a new life in the arts of that time.

1.Mona Lisa: A painting which is almost known by everyone, that’s Mona Lisa.The all-time famous painting by Leonardo Da Vinci. It’s all fame lies in one elusive smile on a woman’s face, also known as la Gioconda means a laughing one. Besides, smile, some eyes are painted in such a manner that even after changing the angle of the view, it still seems to follow. To, Da Vinci, this painting was always a work in progress and due to this reason, it was never sent to its commissioner. He kept it, till the end of his life and after his life, the possession came into the hands of France government and became a public property ie; can never be bought or sold.

2.The Last Supper: Another piece by Leonardo Da Vinci -The Last Supper, the painting portrays a religious scene where Jesus and twelve apostles are busy with a discussion, Leonardo brilliantly shows the bewilderment and perplexity that occurred, after Jesus announced that someone from the apostles would betray him. This painting is notable for its clever use of light, anatomy, and colors. Leonardo was a painter whose approach to work was favoring the use of oil as it is slow drying and permitted him to make changes.

3.School of Athens: Painted in 1511, the School Of Athens, is among the four main frescos(Philosophy, Poetry, Theology, and Law) on the walls of Apostolic Palace in the Vatican. This painting represents “philosophy”, painting has a composition of all the greatest mathematicians, philosophers and scientists from classical antiquity gathered together sharing their ideas and learning from each other. There are 50 figures all lived at different times, but in this painting, they are gathered together under one roof and it has Aristotle and Plato in the center. It is considered to be a masterpiece by Raphael.

4.Creation of the Adam: The Creation Of Adam by Michelangelo has formed the most eminent section of the Sistine Chapel ceiling. In popularity, it is after ‘Mona Lisa’; and along with ‘The Last Supper’, it is the most clone religious painting of all time. The image represents the near-touching hands of God and Adam has become exemplary of humanity and has been emulated and parodied innumerable times. It was painted in 1512.

6.Birth of Venus: The Birth of Venus is one of Botticelli’s finest renaissance works of art, The painting features the Roman goddess Venus as she is born out of the giant shell on the island of Cyprus, she is depicted as a pure and mature woman standing on a seashell. Botticelli had given much heed to every element of Venus. This painting belongs to a period where nudity was a subject in paintings. Consequently, this makes it an important painting of the Renaissance. It was painted in 1486.

7.Primavera: Another piece of art by Sandro Botticelli is Primavera. It is an Italian word whose meaning is spring in English. This painting is also known as “Allegory of Spring”. Many interpretations have been made for the painting and many have come up with explanations as well. The scene in the painting represents the cause of much debate among artistic scholars featuring a mythical allegory and others regarding the changing of the seasons. This painting is famous because of the use of color and different explanations attached to it. Primavera is assumed to be the most controversial painting in the world.

8. Sistine Madonna: It was the last great work by Raphael in the category of renaissance art. The painting shows Mother Mary holding baby Jesus in her hands with Saint Barbara and Saint Sixtus on both sides and two cherubs underneath her. In terms of light and shadows, this painting is a gem. It was painted in 1512.

9.Kiss of Judas: is a painting by Giotto. Many critics regard Giotto as the first genius of modern painting and even some claim that no artist has reached him with only a handful coming close to him. ‘The Kiss of Judas’ is the most famous painting of Western art. The painting captures the moment of betrayal when Judas spots Jesus to the soldiers by kissing him. Giotto skillfully captures the drama and puzzlement of the arrest of Christ as well as the contrast of expressions of Jesus and Judas as they look face to face.

10.Last Judgement: In the history of Western art, Last Judgement is one of the most influential works in fresco. It is painted on the altar wall of the Sistine Chapel in Vatican City. This painting depicts the Second Coming of Christ (a future return of Jesus to earth), the last and eternal judgment by God of all humanity. Jesus is placed in the center of the painting and is surrounded by leading saints. It took four years between 1536 and 1541 to get complete.

Sapan Kumar Teaches The Power Of Self-reliance! – The Second Angle