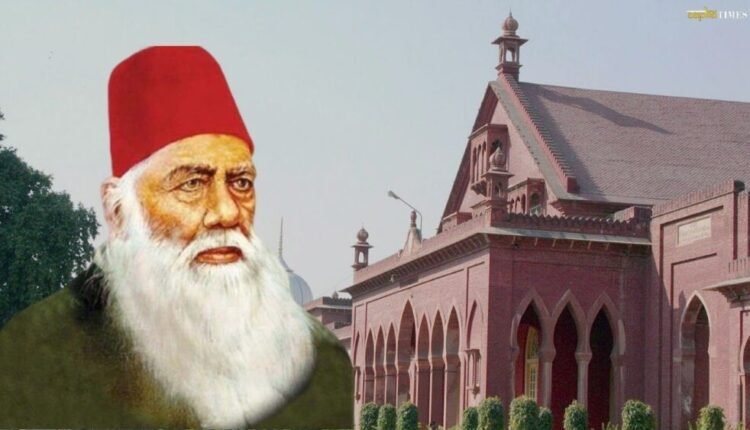 
17 October 1817, when a boy was born in a noble family having generous patronage in Mughal Darbar. A typical happy go lucky child who had the ambition to prosper in his life. Things were good till the Revolt of 1857. Yes, this was the major event which petrified Sir Syed Ahmad Khan. Nobody knew, till that time, he will become the torchbearer of the reformation of the Muslim community and Indians altogether.

After the British determined to lessen the usage of Persian language in the purposes of the state, Sir Syed felt that the liberation of the Muslims lay in recognition of English and Western education. In one of his speeches in 1863, he stated: “The reason why we are so backward is that whilst we have learned in and have benefitted by the philosophy, science and arts of the antiquity, we are almost entirely ignorant of those of modern times.”

Basically, he was anxious and deeply mourned after looking at the pathetic condition of his people. On the other hand, the unfair practise of religion, and orthodox attitudes disconcerted him. He was further saddened by women not getting equal opportunities and pessimistic attitude of guides. He then tried disseminating scientific education among the community. It was significant determinants which led to the opposition faced by Sir Syed by the clergy of his time. Sir Syed had to face intense resistance from the ulema, conservative elements in his community itself. All the maulvis of the time gang up fronting him and held him out of Islamic fold. There were “fatwas” against him. Sir Syed Ahmed Khan had to battle a lack of funds, backlash from religious orthodoxy, to establish the Muhammadan-Anglo Oriental College.

It was not an easy task which he took upon himself to bring radiance into the lives of Indians. He thought and prompted the light of education by ignoring all the good-for-nothing believes and customs. Sir Syed found the panacea of the Muslims in westernization. So he merged all his efforts, attempted to bring social, political, moral, cultural and religious westernization through Western education. In a speech, he said: “The only thing which good raises the Muslim’s to the high pinnacle of progress is high education and until and unless we produced men with high education, we would continue to be down-trodden and would never reach the honourable position which we like to reach.”

Sir Syed was much ahead of his time. He taught the people the way to protest. He gave the example of the reply of Sir Syed to William Meur’s book on Prophet Muhammad (SAW) in the form of a book. A true secular leader. He used to invite Swami Dayanand Saraswati for talks aimed at a better understanding of Vedas. As a result, both the secular leaders had to face the wrath of their orthodox religious conductors.

It will prick hearts when the Aligarh Muslim University whose founder was an epitome of secularism is targeted for being the centre of terrorism. The University is usually largely misinterpreted. It stands for absolute secular values just with an Islamic flavour. The College construction plan was a difficulty. It was not only due to lack of money but also because Muslims thought it would be immoral to give donations to Sir Syed against whom clergy issued fatwas. Muslims were against the idea of English being taught, and nothing was encouraging about their donations. Ironically the University is built on the land given by Raja Mahendra Pratap Singh, and its first graduate was Dr Iswari Prasad Upadhyaya.

Sir Syed even after all these years, remains the embodiment of science and rationalism. His equalization of Islam and nineteenth-century British thought, with its scientism and experimentation, is the best-known formulation. He encouraged the ideology of Keramat Ali that Islam should accept newness since the Quran itself was based on the physical facts of that time and has advocated scientific study. He was an Islamic reformer and educationist who thrived on acting as a bridge between the old and the new, the East and the West.

In 1873, Maulavi Imdadul Ali, the Deputy Collector of Kanpur, opposed the cause led by Sir Syed. He stated that those who wanted the ‘Madrasatul Uloom’ set up were not Muslims. Later, many publications and journals opposed the great reformer. Many ulemas ordered the community not to grant, while fatwas were issued accusing Sir Syed of blasphemy. On the other hand, his cause was supported by the Punjab Akhbar, the Patiala Akhbar, the Avadh Akhbar and the Urdu Guide.

Subsequently, in the year 1864, Sir Syed instituted a school at Ghazipur. Sir Syed had managed about Rupees 17000 and started construction, though he knew the amount was insufficient. The school was built entirely from public contribution. Raja Hari Dev Singh was appointed patron, and a committee was made to run the school. We can see the great wonderment at this in an Iranian visitor’s own words: “It is a miracle. How could one man manage to complete that which could not even be accomplished by his Government.” Eventually, the MAO College turned into “Aligarh Muslim University” in 1920.

We at TSA pay tribute to the great reformer, Sir Syed Ahmad Khan, an epitome of a renaissance for the Muslim community in particular and humanity in general. Nation will always be indebted to the son of soil Sir Syed who was a man of many distinctions. A historian with insights into polished dynamics, an activist of the exceptional quality, leader in democratic character, the founder of MAO College and the forerunner of the Aligarh Movement. In the end, we can say that Sir Syed was a very secular man, and so is his University.

Also Read:  Quotes by Sir Syed: A Man With The Most Rational Attitude And A Concrete Vision

‘We Have A Rich Past Which Needs To Be Preserved’, AMU To Bury Time Capsule In Its Centenary Year