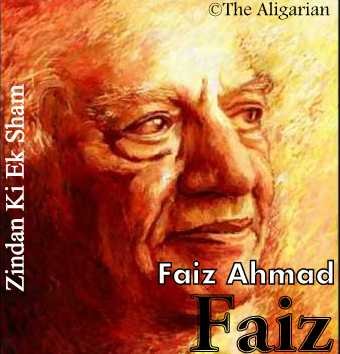 I remember the days when I tried hard to make sense of these powerful poetic verses by Faiz Ahmad Faiz, It was my first semester in masters. Then, I started reading about the history of this Nazm which was titled as ‘Zindan Ki Ek Sham‘.

These magical lines were written in Jail, Faiz revolutionized the emotion and challenged the framework of power with a brush of love. His poetry, rich in progressive thoughts and active commitments, made him the revolutionary poet of his time.

One hand dipped in romance and another in patriotism. Faiz, intentionally portrayed his concern regarding the sufferings of common public/downtrodden and women in his poems.

He was well versed in the classical poetry in Urdu, Punjabi, Hindi, Arabic, Persian, and English. He once said, “The true subject of poetry is the loss of the beloved.” as he was the true follower of Sufi poet Rumi. His philosophy of life, was measuring people who had been excluded or marginalized, He was a great proponent of love for all human beings. A trait which can be traced in the mystic verses of Rumi.

Faiz also rejected the notion of “art for art’s sake” where he beautifully talked about the eternal creativity of beauty and love, not only dwelling into the ideas of beauty and love, but he also carried the voices of the downtrodden in his poetry seeking justice for the sake of humanity.

Apart from his poetic skills and being a revolutionary poet, Faiz was a journalist, songwriter, and activist. Faiz believed that poetry is not just weaving words into a lyrical form, it is also a struggle not only for life but also for art. This struggle of art made him the first Asian poet to win the Lenin Peace Prize in 1963, and also a nominee for the Nobel Prize.

Faiz with his powerful pen blended the 14th-century ghazal (drawn from Punjabi poetic ideals like loss and longing, as well as from Sufi philosophy) with 20th-century modern poetry like free verse into beautiful master piece.

Faiz’s poetic verses, sunk in the ocean of love with a wave of revolution.

“This freckled light, this night-eaten dawn,
This is not that long-awaited dawn break,
This is not the dawn in whose longing,
We set out believing we would find, somewhere,
In heaven’s forest within stars of destination..”

The word ‘Dawn’ is making sense of freedom to imagine a new and bright sun rise.