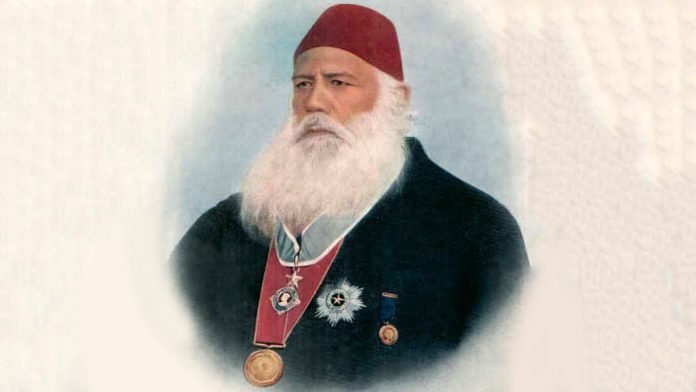 Prominently credited as the true architecture of modern India, Sir Syed Ahmad Khan stands at a life-size foundation of kindness, guidance, and equalitarian. As exceptional a processor of social responsibility as he was, his conviction and judicious outlook throughout his life and career are of enormous magnitude. Sir Syed, while sharing his apathy for the Muslim community, encompasses people from other communities as well. He was the first prominent modernist among the Indian Muslims.

Besides being a voracious pragmatist, Sir Syed Ahmad Khan was a pioneer, a trailblazer, an educationist, a pragmatist, an attorney, a Muslim reformer, a renowned visionary, and a statesman. Word exhaust, thesaurus incapacitate for the change-maker who toiled and accomplished to awaken the Muslims from their deep sleep and embedded social and political responsiveness into them.

Born on 17th October 1817 Sir Syed became an embodiment of a resurrection for the Muslim community in particular and humanity in general. He was a man of many refinements. A historian with insight into accomplished dynamics, an activist of the unique nature and leader in a democratic spirit.

He was the champion of democratic ideals and freedom of speech. He is rightly called the true architect of modern India who spurred the thought process and philosophy that ultimately led to the creation of intellect and unique might.

A man who sacrificed his entire life for the prosperity of Muslims to drive them out of the era of darkness they were living in.

“… the real greatness of the man (Sir Syed) consists in the fact that he was the first Indian Muslim who felt the need of a fresh orientation of Islam and worked for it.”

Sir Syed arose during a very pivotal time in Indian history when the Muslims in India were facing a pathetic situation. When the British were exercising barbarities against Muslims, he took charge of the entire situation. He culled the fresh impulse to acquire the challenge on the part of his community. To the Muslim community, Sir Syed Ahmed Khan was and is like the eye which weeps for the suffering of any and every part of the body.

After the battle of 1857, the poor condition of his community lamented him, and he while working as a civil servant felt troubled about it. He was increasingly concerned about the future of Muslims. It can be challenging circumstances for anybody to step down from the pedestal of richness, success, and noble background, but it was Sir Syed’s firm will-power which could not prevent him from his shaft.

He recognized very early that the economic disaster and the backwardness of Muslims could only be washed through modern sciences and technology. Sir Syed defines education “as the process to bring about whatever good is in man.”

He was dazzled with western learning and promised himself a “Muslim Cambridge” in India and worked hard to turn his dream into reality. He was awed by the resourcefulness and inclination of England and established that the western system of education could be a catalyst in the prospect of Muslims.

Sir Syed, therefore, started the Aligarh movement, which concentrates on exposing quality learning to his community. According to Sir Syed, modern education is the only medium that will make people skilled enough to face social and political persecution. Sir Syed said,

“Do not show the face of Islam to others; instead show your face as the follower of true Islam representing character, knowledge, tolerance, and piety.”

Sir Syed will always be held as a Muslim social reformer who advocated harmony and pacific existence of all communities. It is beyond the acumens and baffles us how a man has so much of aspiration. In the exhortation of his dreams, he had many impediments such as lack of funds, resentment from the orthodox, life threats. He was scorned and called by names, but he answered very benevolently

“Call me by whatever names you like. I will not ask you for my salvation. But please take pity of your children. Do something for them (send them to the school), lest you should have to repent”.

To accomplish his vision of educating society and making them competent, he opened many schools starting from Moradabad to Ghazipur and finally in Aligarh a Muhammadan Anglo-Oriental (MAO) College which later turned into Aligarh Muslim University. The university is the door of wisdom, prosperity, and possibilities for all communities in India and overseas.

AMU remains India’s premier institution for learning and institute of distinction. The university that does not believe only in conferring Talim but also Tarbiyat and Tehzeeb.

“Muslim should have in his right hand the education of the Holy Quran and in left-hand scientific education and on forehead Kalema-e-Tayyibah.”

He emphasized on the importance of higher education that corresponded to modern and scientific temperament. Not only in the field of education, but Sir Syed also outshined in the field of literature. He authored Tahdhīb al-Akhlāq (“Social Reform”), “Causes of Indian revolt”. He also showed the world how to disagree with an opponent. Once when he was dissatisfied with Sir William Muir’s idea of Islam, he wrote an entire book “Life of Mohammed” to counter the reasoning of Muir.

Sir Syed worked to bring back the lost grandeur and reputation of the Muslim community by enhancing education coordinating it with the teaching of Islam. He was very much against the corrupt practices and offered institutional reforms to end obscurity. He was a nation builder who with his progressive nature and modern procedure tried to establish Hindu-Muslim unity. He said,

“Hindus and Muslims are like a beautiful bride who has two beautiful eyes one is Muslim and second is Hindu; if one eye of the bride will be destroyed the whole beauty will come down.”

Sir Syed not only uplifted Muslims on the scholastic aspect but also gave them the political stand such as all India Muslim educational conferences which provided Muslims to voice their opinion and bridge the gap between the rich and poor. He was a hard-core rationalist, and his views were respected throughout.

His entire life is a sparkling lantern which can lead us through the difficulties and problems we face in the contemporary world society. His approach and efforts change not only the course of the Muslim community but also their fate collectively.