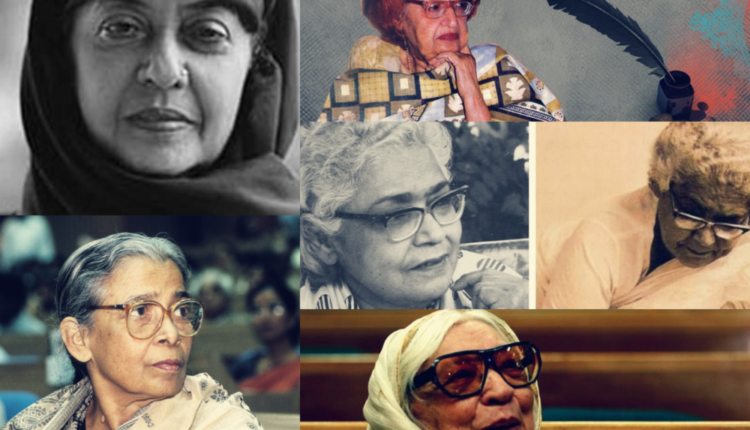 
Be it a cup of brimming tea or a short story both take less time to finish but leave you refreshed for the longest time. Short stories can be your best companion on a train journey, short or long. In your happy times as well as during bad days, they have a way with every mood of their readers. Writers till now have explored all the topics in this genre of writing and have always amazed their readers with how different topics can be addressed in such short pieces.

Today, TSA brings you 5 Indian short story wroters which have blessed the genre with their amazing talent of story writing and hence are must read.

Ismat Chughtai is an immensely unapologetic feminist writer of Urdu fiction who wrote short stories concerning the sexuality of women and challenged the patriarchal structures that repressed them. However, her outspoken style of storytelling on the forbidden topics got her into trouble. Her story, “Lihaf” was charged for obscenity in 1942.

“In my stories, I’ve put down everything with objectivity. Now, if some people find them obscene, let them go to hell. It’s my belief that experiences can never be obscene if they are based on authentic realities of life.”

However, lihaaf and other works in a similar style such as ‘Terhi Lakir’ overshadowed her works that came afterwards. About the same, Chughtai writes in her memoir, A Life in Words

“I am still labelled as the writer of Lihaaf. The story brought me so much notoriety that I got sick of life. It became the proverbial stick to beat me with and whatever I wrote afterward got crushed under its weight,”

Chughtai didn’t approve the ideology of partition and has written works concerning the same. “Jadein” is one such example where she incorporated the resistance through her work. Chughtai has joined Progressive Writers Association after graduation and its influence is visible in her style of writing. Chughtai is regarded as the pillar of Urdu fiction along with three of her male contemporaries Saadat Hasan Manto, Krishan Chander and Rajinder Singh Bedi. Chughtai was honoured with Padma Shri.

Mahasweta Devi is a prolific writer in Bengali. However, her work has been translated into Marathi, Hindi, Assamese, Telugu, Malayalam, Punjabi, Oriya, Gujarati and Ho, a tribal language. She has also been translated into English, Italian, French and Japanese. Scholar Gayatri Chakravarti Spivak translated her works into English. The Padma Shri awardee wrote short stories, novel, children’s stories, plays and political article.

Mahasweta Devi is known for being a voice to the marginalised section of the society- the landless labourers, poor peasants, tribals. She is called the mother of sabars for standing up against the rights of sabars. She was so highly endeared by the people that they called her Ma’ (mother among the Kheria tribals) or ‘Marang dai’ (sister among the Santhals).

She even edited Bortika, a quarterly publication to voice the issues of the lowest in the social pyramid of power. Devi has written some twenty short story collection, her great work include Hajar Churashir Ma, Rudali and Aranyer Adhikar however she is widely known for her 9short story Draupadi.

Qurratulain Hyder popularly known as Ainie Apa began writing at a very early age of six or seven and got her first short story published in a children’s magazine, phul. Apart from an enormous collection of novels on varied theme of socio-cultural milieu, historical and political structure of the subcontinent.

Haider also wrote three collection of short stories – “Shishe Ke Ghar”, “Patjhar Ki Aavaz” and “Roshni kī Raftār”. She even translated works from English to Urdu which includes Henry James’ The Portrait of a Lady and TS Eliot’s Murder in the Cathedral.

Krishna Sobti a prolific Hindi writer received Sahitya Akademy Award for Zindaginama in 1980 and in the year 1996 was honoured the Sahitya Akademi Fellowship, the highest of honour. She was awarded Jnanpith Award and was honoured with Padma Shri in 2010 which she refused.

Best known for her 1966 novel “Mitro Marjani”, she wrote short stories “Lama”, and “Nafisa” that took over the literary scene in 1944. She chose to write on female sexuality and identity however she received heavy criticism and backlash for profane writing style. She is not to be regarded as a writer for women’s cause alone as she portrayed a masculine viewpoint as well.

A feminist voice in post-colonial era, Kamala Das was known by her pen name Madhavikutty. She is called the mother of modern Indian English poetry for her contribution in modern poetry. She is also compared to American poet Sylvia Plath because of her confessional style of writing.

“I cannot think of any other Indian autobiography that so honestly captures a woman’s inner life in all its sad solitude, its desperate longing for real love and its desire for transcendence, its tumult of colours and its turbulent poetry.”

K Sachithananthan writes in the forward to the autobiography of Kamala Das named ‘Ente Katha’ (My Story) published in 1973. Padmavati the Harlot and other stories (1992) is her collection of short stories. Some of her well-known stories include “Pakshiyude Manam”, “Neypayasam”, “Thanuppu”, and “Chandana Marangal”.

She received the Kerala Sahitya Academy Award in 1969 for the short story Thanuppu (Cold). She was also shortlisted for the noble prize in literature in 1984. She has a wide reach and her work has been translated into languages including German and French.
She introduced her readers to female sexuality, societal norms that restricted women, child marriage and marital infidelity.

With tight schedule and juggling work hours a short story could be a perfect getaway.

Have you read any of the above mentioned prolific women writers? If any, which is your favourite story? Leave down your answer in the comments section below.

7 Indian Books That Should Be Made Into Films