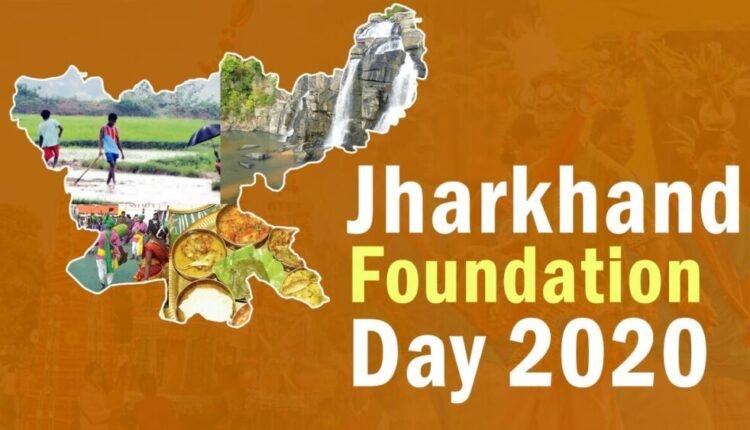 The state was carved out of Bihar in 2000 just after the Parliament approved the Bihar Reorganization Act, 2000. A State which is known to be the kin of Bihar was announced independent on this day, 20 years back.

Later, six more districts were carved out by rearranging the occurring districts. The 23rd and 24th districts, Khunti and Ramgarh, came into presence on September 12, in the year 2007.

The day of Foundation coincided with the birth anniversary of a well-known tribal leader Birsa Munda also remembered as Bhagwan Birsa, who played an important role in the history of Indian Independence Movement.

As The History Recedes, We Fall Back In Times. With Us, Please Take The Glimpse A Bit

The campaign for a separate state of Jharkhand is a mission spread over a century which is traced back to the early 1900s, when Jaipal Singh, an Indian Hockey captain and Olympian, proposed the idea of an independent state comprising of the southern districts of Bihar.

It was August 2, 2000, when the Parliament of India approved the Bihar Reorganization Bill to formulate the state of Jharkhand, carving 18 districts out of Bihar to construct Jharkhand state on 15 November 2000, making it the 28th state of India.

Many historians believes, there was already a unique geopolitical, cultural element called Jharkhand even before the time of the Magadha Empire.

Many philosophers now believe that the dialect used by tribes in the state of Jharkhand is similar to the one utilized by the Harappa people.

The Colonization of Jharkhand:

Colonization by the British East India Company concluded in spontaneous defiance from the local people. Nearly a hundred years before India’s First War of Independence (1857), Adivasis of Jharkhand were already starting up what would come to be a series of recounted rebellions against the British colonial rule. All of these rebellions were repressed by the British through the heavy deployment of troops across the territory.

Who was Birsa Munda?

▪ Born in the year 1875 in the Munda tribe, Birsa Munda is frequently quoted to as ‘Dharti Abba’ or the Earth Father.

▪ He led the revolution that came to be acknowledged as Ulgulan (revolt) or the Munda rebellion against the British government who imposed the feudal state policy.

▪ He spread awareness among the masses and cultivated the seeds of revolt in them against the landlord as well as the British government.

▪ He established masses to stop compensating debts/interest to moneylenders and taxes to the British.

▪ By this, he led a revolution to make an end to Victorian law and order and the organization of Munda Rule in Jharkhand.

▪ He formulated two military units- one for military training and armed struggle, the other for propaganda and integrated religion with politics and wandered across villages giving lessons and structuring a politico-military association.

▪ His struggle against the violation and discrimination against tribal led to the passing of the Chotanagpur Tenancy Act in 1908 which restrained the passing of land from the tribal people to non-tribal.

What makes the State interesting :

▪ Jharkhand shares it’s border with the states of Bihar to the north, Uttar Pradesh and Chhattisgarh to the west, Odisha to the south and West Bengal to the east.

▪ Ranchi is the capital of the state, Dumka is sub-capital.

● Apart from being prosperous in coal, the state also accounts for at least 40% of India’s mineral resources like mica, uranium, granite, bauxite, quartz, gold, iron, copper (25℅ of India).

● The State is also known for its gorgeous waterfalls, lush green forests such as Saranda, which is the biggest Sal forest in Asia.

● The Dalma Wildlife Sanctuary, and Betla National Park, which has the significance of being one of India’s initial tiger reserves (1974), Betla spotlights dense tropical forest cover and a rich variety of fauna

● Cruise named after Ranchi, SS Ranchi was Peninsular and Oriental Steam Navigation Company “R”-class steam ocean liner that was constructed in the year 1925 and scrapped in the year 1953.

▪ A revolutionary land for the tribals, Munda rebellion against the British government who imposed the feudal state system.

▪ Jamshedpur is the first well-planned city, founded by Jamshed Tata, 1907.

As we progress, let not forget a State so relevant in most aspects, Jharkhand, is still considered backward along with Bihar but, after reading this, your perception might have changed.

An Introduction To The Stock Market – The Second Angle