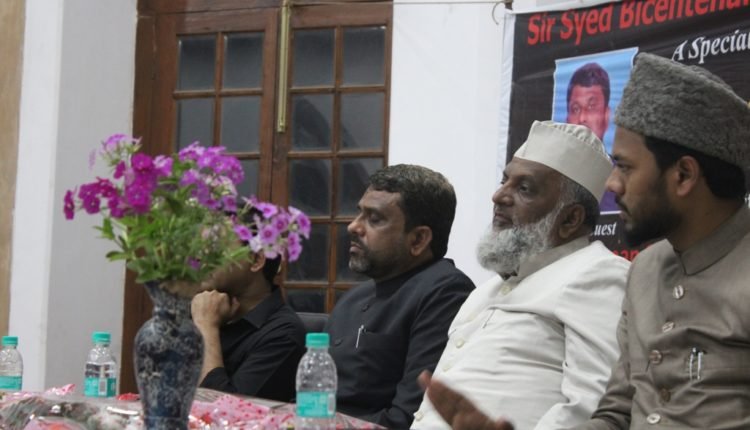 Mr. Akhtarul Iman said that taking Sir Syed’s message forward was the need of the hour and spreading enlightenment among marginalized people was the best tribute one could pay to the great reformer of the 19th century India. He urged the students to work for propagating education in the remote areas of the country by all means they can employ for this purpose.

He said that the establishment of an AMU centre in Kishanganj was a big step in this direction and it will prove to be a catalyst in providing quality higher education in this region.

Guest of honour, Prof Mohibul Haque also expressed his views. Dr. Badruddoja Khan, Provost of the Hall welcomed the guest and introduced him to students. He also appreciated Mr. Akhtarul Iman’s role in the establishment of AMU Centre in Kishanganj.

What is Aligarh Movement?
The Aligarh Movement was the push to establish a modern system of education for the Muslim population of British India, during the later decades of the 19th century. The movement′s name derives from the fact that its core and origins lay in the city of Aligarh in Northern India and, in particular, with the foundation of the Muhammadan Anglo-Oriental Collegiate School in 1875. The founder of the original college, and the other educational institutions that developed from it was Sir Syed Ahmad Khan. He became the leading light of the wider Aligarh Movement.

The educational reform established a base, and an impetus, for the wider Movement: an Indian Muslim renaissance that had profound implications for the religion, the politics, the culture, and society of the Indian sub-continent.