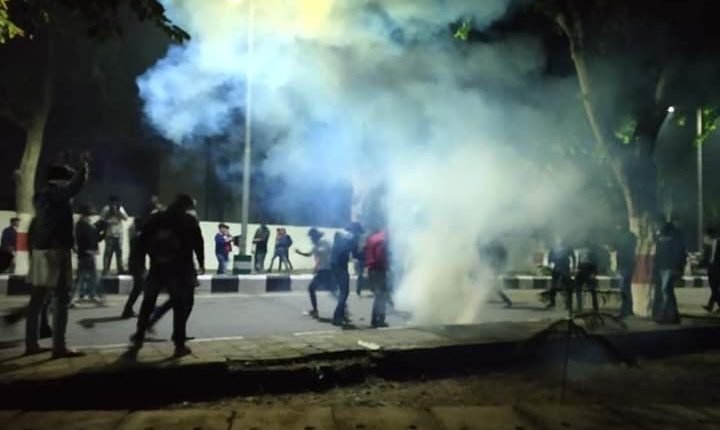 Citizenship (Amendment) Act and National Register of Citizens have led to protests across the country and one of the first institutions to organise dissent against the two was Aligarh Muslim University. As curfews and internet bans continue to plunge the population into darkness – real and virtual – many lies are being disseminated: from Ramlila Maidan, AMU’s administration, to Aligarh’s district administration.

Despite claims that the protests sprang spontaneously and involved “anti-social elements”, the students of the varsity had been debating, discussing and renouncing CAA-NRC for months prior.

Based on my own experience as well as that of other students, I’ve stitched together a timeline of the events leading up to and following the assault against students on 15 December.

4 pm: I, along with 200 other students of AMU, gathered to discuss the Bill at Kennedy Lawns near the Cultural Education Centre. We discussed and debated over how the Bill was discriminatory, unconstitutional, and divisive.

We did so in a peaceful manner, as we had been doing for the previous couple of months, despite heckling by the administrative proctorial team.

6 pm: Some of us who were really infuriated by the Bill, peacefully burnt its copies.

2 pm: Tired of the administration’s neutrality, students sent show-cause notices to the Teachers’ Association, the Non-teaching Staff Association, as well the Vice Chancellor to know, clearly, their stance over lending support to the students’ movement against CAB and NRC.

6:30 pm: More than 4,000 students marched with torches in their hands from the Maulana Azad Library Canteen to the Bab-E-Syed, the main gate of the university.

8 pm: A peaceful march had led to 500 unnamed and 21 named FIRs against AMU students by the district administration. We weren’t even informed of the same till we saw the local news.

8 am: The administration was trying to silence us, thus we resorted to plain-old Gandhianism. Around 20,000 residential students began a hunger strike and boycotted the dining halls at their respective hostels.

10 am: There was one hall where food had been prepared before we could inform them not to make any. We managed to get the food out on e-rickshaws and distributed it among the poor. “Rizq, or the blessing of food”, we told the people we were feeding, “should never be wasted, even during a war.”

2 pm onwards: The protest at Bab-E-Syed was given new life as Mr Yogendra Yadav, Dr Kafeel and Mr Fawaz Shaheen addressed the gathering. We were all appalled to hear that both the district and university administration had tried to stop them. Why were they not with us?

6 pm: “Jab jab zulmi zulm karega satta ke hathiyaaro se, chappa chappa goonj uthega inquilaab ke naaro se!” and other revolutionary slogans sounded as women students of Abdullah Hall and Indira Gandhi Hall, who were denied permission to join the protests at the main campus, broke the locks of their halls and marched to Bab-E-Syed to show their solidarity.

2 pm: After Friday prayers, I marched, waving the tricolour. I was responding to AMUSU’s call for a rally from Jama Masjid to the DM’s Office. More than 10,000 students had participated in it. Then, on an uncharacteristically democratic and diplomatic note of support to the protests from the SSP of Aligarh, I departed.

7 pm: I was in the library with my friends, trying to study a semester’s worth of Fluid Mechanics in a few hours. I was uneasy as it was, after all, the library of Jamia, from where the most horrific instance of police brutality had emerged. It was then that I heard firing. All of us ran outside. There were at least 5,000 students.

8 pm: The Rapid Action Force and the CRPF were stationed right outside in full-blue riot gear. I asked a passerby what had happened, “We had come here to protest but they (the police) became involved after the students raised slogans against police brutality. Some policemen started abusing the students and throwing stones, after which the students retaliated in the same manner.”

Chaos ensued. The police were firing tear gas and rubber bullets directly at students. I saw students getting buckets and putting them upside down whenever a tear-gas shell landed. The students were fighting back. The police had entered the campus, unleashing lathis.

More than 60 students were left injured. Students ferried their peers on scooters and bikes to Jawaharlal Nehru Medical College. In the aftermath, it was found that the fingers of two students had been cut off and one had to have his arm amputated. I ran towards Aftab Hall for shelter in a senior’s room. I couldn’t contact my friends.

10 pm: I received news on WhatsApp. The Registrar released a handwritten notice announcing the closure of the university till 5 January. The district magistrate of Aligarh issued that internet services of the area were to remain shut down for the subsequent 24 hours.

Hostelers were told to vacate their rooms. Across the hall where I was, I saw the police with RAF and CRPF entering various hostels of AMU. An entire room was burnt by the tear-gas shells. We spent the entire night praying we wouldn’t hear a knock on our door. The internet was shut down so we had no idea what was happening outside.

8 am: We left the hall next morning. Buses were stationed outside AMU to drop off students. I went around the university.

10 am: I saw the RAF stationed across the university, overseeing the process of evacuation. Notices were issued by the Provosts warning of action in case of non-compliance.

4 pm: I left the campus. Civilians in nearby areas had organised protests against police brutality and the AMU administration’s autocratic behaviour.

They demanded the release of the 26 people who had been detained by the police. Internet and SMS services were shut down indefinitely. Market areas were closed. It was an undeclared curfew.

10 am: The tension manifested in the form of protests. Despite heavy police presence, I was able to partake. Protesters demanded an explanation into the administration’s role in the violence against students.

12 pm: At the behest of AMU Teachers’ Association, we participated in a rally in solidarity with the students and against the CAA and NRC. Office bearers raised the demand of an independent inquiry, yet the VC refrained from commenting.

2 pm: I got to know that Allahabad High Court directed the District Administration to set up an enquiry as well as to provide medical care to the victims. We started collecting evidence.

The situation began getting better in Aligarh. The SP went around the city, talking to the protestors in Shah Jamal, Jamalpur and Civil Lines.

The VC called a meeting with some members of AMU Teachers’ Association to explain his position.

12 am: Internet services were restored in Aligarh after six days.

8 am: In an interview, the Vice Chancellor claimed that he had not ordered the police in and that the students voluntarily vacated the hostels. However, he admitted that the police was called to counter “anti-social elements”. Both of these statements prompted outrage from the student community, who called for his resignation.

2 pm: Internet revived an otherwise dormant protest. Non-resident students decided to protest as we could not afford for the protests to lose momentum till 5 January.

4 pm: The university instituted an enquiry to be conducted by Justice VK Gupta, Former Chief Justice of Uttrakhand High Court to probe the untoward developments which had taken place on 15 December.

5 pm: With a candle in one hand and a poster in another, I marched with AMU’s non-resident students. There was an unexpectedly massive turnout. We raised slogans against the UP police’s brutality as well as our own administration’s stand. The march ended peacefully and we went home, thinking the protest had gone well. It hadn’t.

A total of 1,200 FIRs were lodged against us for holding a peaceful protest. If that wasn’t enough, a public discussion on the history and the significance of Section 144 was turned down by the proctor office.

Restless as I was after Christmas, our friends organised another protest march at Duck Point at the university, denouncing state violence as well as the CAA, NRC and NPR.

I stopped at a dhaba in Shamshad Market but before I could take a sip of my tea, six trucks of RAF zoomed towards Chungi Gate of AMU. A friend called to inform me about internet services were being shut from 12 am.

I will see you on the other side.

This article was originally published on thequint.com on December 27, 2019.