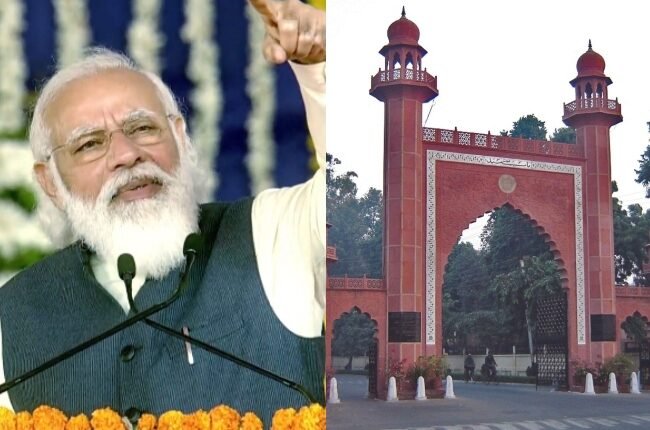 PM Modi To Be Chief Guest At AMUs Centenary, VC Pleads “to Keep It Above Politics” – The Second Angle


Aligarh, December 18:  In what is being considered a bold move by many, Prime Minister Narendra Modi will grace the Centenary Celebrations of the Aligarh Muslim University as Chief Guest on December 22nd through a virtual commemorative meeting.

AMU community is thankful for his (PM Modi’s) acceptance to participate in the celebrations marking 100 years of the university.

AMU is one of the oldest Indian varsities and an ‘Institute of National Importance’. The latter is celebrating its ‘Centenary’ this year as it was formally inaugurated as a university on December 17th, 1920 in pre-independence India by an act of Imperial Legislative Council.

The varsity has remained controversial over the course of the last 6 years since the NDA-led government came to power. Leaders of the BJP have repeatedly given statements criticizing the varsity’s students in the recent past which have made the AMU-BJP relationship some sort of a sensitive one. The Vice Chancellor’s open urge to the students to keep the program above politics can easily be understood by the fact that whenever the BJP & AMU have come on-board together, the ship has hit the iceberg.

His Excellency President Ram Nath Kovind visited the Aligarh Muslim University for its Convocation Ceremony back in 2018 amidst a lot of protest on-going in the campus against his visit. In fact, in his address, he quite vocally remarked

By virtue of being the President of India, I also happen to be the ‘Visitor’ of all the Central Universities and I have a right to visit them.

Modi’s upcoming presence at the Centenary Celebrations has garnered mixed reactions from the students. Some of the students have already decided to boycott the program and are openly condemning the decision to invite the PM stating it as “an act of shamefulness and just in the sole personal interest of the Vice-Chancellor”. The primary cause behind this exasperated narrative is the night of December 15th, 2019 when the Uttar Pradesh Police barged into the AMU campus and fired tear gas and rubber bullets at the students who were protesting against the controversial Citizenship Amendment Act.

While a faction of students being completely against it, some students have welcomed the decision labelling it as a “bold and far-sighted move in the interest of the university itself”.

Union Minister of Education, Dr Ramesh Pokhriyal Nishank will also be attending the virtual event with the Prime Minister.

The commemorative event while being historic in itself; will also mark a significant landmark of hosting a sitting Indian Prime Minister at AMU after more than 50 years.