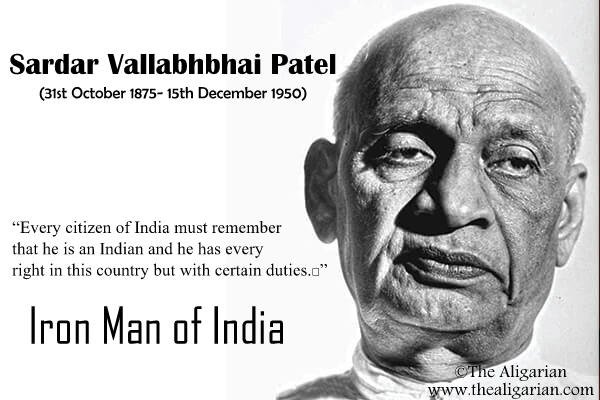 Sardar Vallabh bhai patel, Iron man of India was born on October 31st, 1875. By profession he was lawyer & statesmen. His contribution to free India can’t be defined on papers. He is man who united the nation in all odd times. His extra ordinary skills & great ability of vision is still too relevant & of utmost important. He himself was a book on how to keep the  nation united & together in tough times. When enemy was sitting at border like hidden dragon, he taught the nation that how to be a crouching tiger. He united the nation with all possible means. With respect or forcefully whatever action was necessary to make a one India at the time of freedom & partition. He was the first home minister & first Deputy prime minister of free India. He devoted his whole life for the unity and integrity of nation. His position was as relevant as Mahatma Gandhi, Pandit Nehru, Subhash Chandra Bose and Bal Gangadhar Tilak. . He served the nation with pure heart . He worked day & night to keep India afloat on path of unity & progress whenever the anti-forces planed anything evil against nation inside or outside. He never spares anyone who raises the eyes against nation. Man like him is just now exists in dreams only. Such persona comes on earth once a century. He was founder of modern  India. If Baba Bhim ji wrote for India then he worked for India. Such personalities are rare  now a days to inspire the youth & new generation  He was practical visionary & architect of modern & united India.

Immediately after Independence when Sardar Patel finished the herculean task of integration of the native States, economic growth was uppermost in his mind. He expressed his desire to fully devote his time and energy to achieve the economic growth of our country. During a speech in Bombay on Feb.20,1948, he exhorted the people to achieve greater production for the country. He said, “The future of India depends on how much more we can produce in the matter of food grains, clothes, iron, cement and other things required for the common man as well as for the army. This is not only necessary to remove poverty, but also essential to strengthen the Independence which our country has secured by paying high costs, and sacrifice and also with self- confidence. If the labour will adopt the right course, they will strengthen the country and India’s future will be glorious. Labour should keep the interest of crores of Indians before their sight and should not be misled by a wrong leadership. They should see what is in the best interests of the country”.

He advocated that the government, labour, employers – all should work together. Having the interests of labour at heart, he said that labour should get adequate wages and also their necessities for a happy and comfortable living.

While emphasising the need for industrial output, he did not lose sight of agricultural production. In his appeal to the agriculturists, he exhorted them to work hard with a will to get the best out of their exertions and deliver to the Government the maximum they could spare . Sardar Patel emphasised that self- sufficiency was essential for development.

In his address on November 11, 1949 at the conference of businessmen, industrialists and labour leaders, Sardar Patel had offered a practical solution to the Again, his thought-provoking broadcast to the nation on November 14, 1949 which has been aptly titled, “The Blue-Print for Prosperity” contains a masterly survey of the country’s problems and a prescription of the remedies and their solutions. The observations are significant and enduring and relevant in today’s situation, or for all times to come.

Referring to the high cost of food imports, he said that -if we had at our disposal the amount which we have spent on food imports during the last three years, we could have completely rehabilitated those unfortunate brothers and sisters who have had to leave their hearts and homes in Pakistan and who are still looking up to us for relief and succour. My heart bleeds to see so many of my unfortunate countrymen living in conditions of filth and poverty. Let those who pass by them reflect for a moment how they themselves are contributing to their misery by failing in their duty to help themselves and help us in ensuring self-sufficiency in food.

In his appeal to the industrialists, businessmen, traders and labour, he said –  “Let me also make a special appeal to those who have money to spare. It is, I know, a large body of heterogeneous elements. We are not spendthrifts as a nation; saving is our national instinct, whether we are agriculturists, labourers, businessmen, lawyers, civil servants or traders.  “Spend less, save more and invest as much as possible” should henceforward be the motto of every citizen in the country and all of you must see that it becomes the guiding principle of your life. You can select for yourself any suitable means of investment which are open to you, but only make sure that all the money that you save is spent for national cause.

In 1950, the health of Sardar began deteriorating. Therefore, Maniben began restricting his meetings and work. When his health condition even more worsened, he was confined to bed after 2 November and unfortunately after a massive heart attack, Sardar Vallabhbhai Patel died on December 15, 1950 at Birla House in Bombay.