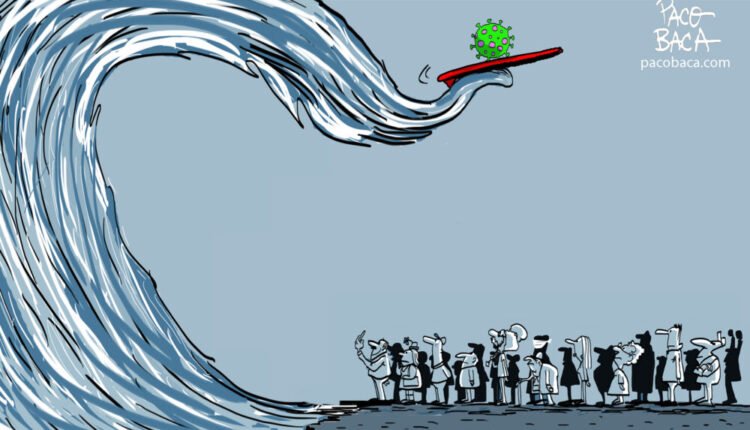 
India has recorded 26 million cases of Covid-19, becoming an epicentre of the global pandemic. The second wave with stronger mutations has exposed the collapsing government; hospitals are overwhelmed, scarcity of drugs and oxygen has induced panic among citizens. But, to our horror, a third wave awaits us.

A wave refers to the rise and decline of infection cases over a while. The term described the seasonality of infections, appearing after some time and vanishing. Along with the country, the states also have their own waves of infection. For example, Delhi has experienced four peaks, whereas in Madhya Pradesh and Rajasthan the cases were declining till February. This showcases the distinction between a country’s wave and a state’s wave.

But for, a third wave to emerge, the second wave should decline, right?

Dr Rijo M John, a health economist, stated the seven-day average of newly reported cases has peaked at 392,000 with a steady decline. So, cases have declined? Wait, there’s more…Even if the second wave appears to be fading, it might not be the case for states. For example, Maharashtra, Delhi have shallow growth of cases, but the cases in the South have also been rising. This proves a wave is not “uniform.” There is a possibility of India reaching the peak as most cases are spreading in rural areas due to poor surveillance. Such heterogeneity in states and rural makes it difficult for the second wave to experience a sustained decline.

The rate of decline in the first wave was slow. However, the decline of cases in the second wave appears to be faster, with no clear reasons why. Dr Bhramar Mukherjee, a biostatistician at the University of Michigan, has been tracking the Covid-19 cases in India. According to her analysis, the cases would decline at the end of May, by the end of July; the cases will be similar to that of February. But this depends on India’s lockdowns. World Health Organization has stated, the positivity rate to be 5% for 14 days for the country to open safely.

Could the third wave be stronger?

By definition, a fresh wave is weaker than the previous wave as many people would’ve gained immunity But, in India’s case, the second wave was stronger. With lessons learned hard way, it is predicted, the third wave will be stronger, the occurrence of the wave is unpredictable. There are chances of it being weak since a large number of people have been affected in the second wave than first. However, Gene mutations in the virus can affect the calculations The mutation of the virus makes it escape the immune response developed among people.

What measures could be taken to safeguard our country from a third wave?

As Vijay Raghavan, Principal Scientific Advisor called the third wave “inevitable”. He clarified, it can be avoided if strong measures are undertaken. Opening gyms, dining pubs, can be a “high risk” and should be delayed.
The vaccination drive should pick up speed. Appropriate behaviour of mask, social distancing, sanitization, avoiding mass gatherings should be followed.

The Early declaration of victory against the Covid-19 virus has caused disastrous consequences, it should not be repeated

Also read: The Poison of Ultra-secularism and its History

With The Beginning Of 5G, Nikola Tesla’s Dream Of Wireless Electricity Is Still Alive. – The Second Angle

How Do I Make A Superfun Career With Video Games? – Blog – Mentor Monkey