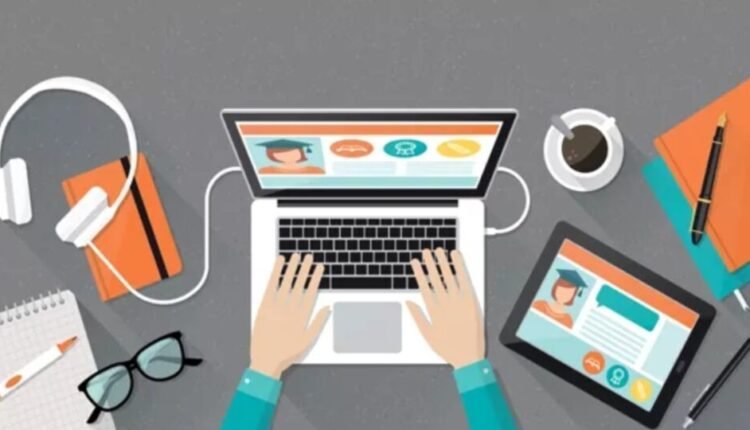 
Many educationists feel that although digital learning is beneficial in terms of technological advancement, but making it necessary when many parts of India lack the basic e-structure is a huge problem that needs to be tackled, before moving towards a technically advanced future. Now, to attend an online class, there are two main things that a student needs – firstly, a computer is required, which many families cannot afford. These circumstances have made the education situation, nearly impossible for those who are not so financially sound. Secondly, even if people can afford computers, many parts of our country have unreliable networks – mostly rural, resulting in the disconnection between classes that breaks the flow of learning.

Students are facing difficulty keeping up with their education in these dire circumstances caused by the pandemic. Also, in my opinion, real education is not seen during online teaching because most of the students attend classes by switching off their cameras and microphones and then probably dozing off in their beds. During exams, they have everything ranging from the internet to the books with them, and thus, there is no surety that they will not cheat. Even though they will be visible through the camera, there are several ways through which their creative minds can work in aiding them to cheat. Taking an exam from home is an oxymoron. There is no such rule that will result in the suspension of a student if he/she cheats in his/her online exams. Even if it is, is it taken seriously? No! Do you know why? Because no one will ever know who cheated and who hasn’t! But I feel that these problems regarding learning can be resolved if the students want to study but what about the economic problems? Due to the economic problems and network issues, those who really want to study cannot afford to study. This issue persisted even in the case of physical learning. The digital education system has now made it even worse.

Recently, a news report by the Times Of India claimed the students have been gathering from three villages in Devalamakki Gram Panchayat in Karwar Taluk, Karnataka, at a bus stand to access the internet for attending online lectures due to the non-existent Internet in the forests and hilly areas of Uttar Kannada, thus leaving them with the only option of gathering on a particular bus stand every day. Nage, Shirve, and Kove are the 3 villages among the 8 of them which comprise Devalamakki. The entire Devalamakki has only one BSNL Tower, thus lacks proper internet connection causing the students to walk or ride every day to either some shops or the bus stand. This becomes even more difficult during an ongoing coronavirus pandemic where social distancing is the key norm to be followed to remain healthy. A villager, Prajwal Shet claimed about the village being a beautiful trekking spot and still lacking basic facilities like internet and mobile towers. Although the agriculturists have managed to afford a mobile phone for their children through their hardships, they have been of no use, and they have been requesting the government to increase the number of mobile towers in the area to solve the issue.

Another factor posing a hurdle in online teaching is privacy among social situations. In families living in small houses, the students are unable to get a private space to attend online lectures, and a lot of disturbance is caused while taking tests and completing assignments that require the students to be focused and require attention. Thus, the significance of separate schools and campuses which provide a place for mental and social development along with acquiring knowledge is understood now. Most of the students and teachers have been complaining of eye pain, stress, and headaches due to sitting in front of a computer and mobile phone screens for an extended period of time, thus harming them physically as well. Talking about the video lectures, students are provided with pre-recorded ones which can be viewed at any particular time which destroys the discipline of following the timetable.

According to various students, there has been a mental overload on them because, in an online classroom, the amount of study material is more than that in an offline one due to interruptions and normal interactive sessions during a particular class. The amount of homework they get is also a matter of concern which only gets submitted after being copied from the books and is of no use. How would you feel if you keep sitting at your home for the first 6 hours of your morning in front of a screen like a dead person and then working the entire day at the very same spot to copy-paste assignments and other homework accompanied by a non-existent peer learning?

Also Read: The Brave New Era Of Online Learning But Not A Smart One!

Now, the question arises- how to resolve such problems? Various institutes like IITs have been leaning towards the conduction of in-person examinations. IIT Bombay has claimed that it will help the students by providing them with the facilities to attend classes like network data packs and other hardware facilities. Some IITs will be considering the assignments as a means of grading as for now by keeping a multi-camera criterion – one for viewing the students and the other for the students to take their test. These are again strange alternatives having the same socio-economic and technical disadvantages. Certain IITs suggested the use of spyware software which will monitor the movements of the students during the exam including facial twitching and other expressions by scanning. But this again has various privacy issues and the fact that these technologies will slowly be normalized through for other means, is also a matter of concern. Thus, these challenges need to be tackled before a full-fledged e-structure takes control of our education system.

Top 6 Online Safety Tips, You Secured Yet? – The Second Angle