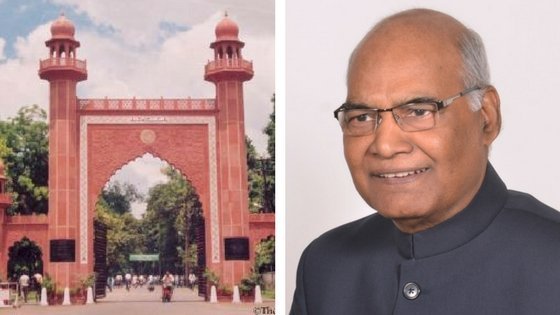 The prestigious Aligarh Muslim University is going to organize its 65th Annual Convocation on the 7th of March.
As soon as, it was announced by the University administration that, Shri Ram Nath Kovind (Hon’ble President of India) is going to be the Chief Guest at the Convocation, the latter sparked a new controversy in the campus.
Indeed, it has had to be a matter of Pride & Honour for the whole University that a serving President of the world’s largest democracy will be there to grace the auspicious occasion.
It was after 32 years that the President of India will be arriving at AMU for its Annual Convocation.
Shri Giani Zail Singh during his tenure attended the 1986 AMU convocation, Shri Fakhruddin Ali Ahmad was in the University for the 1976 Convocation, Dr. S Radha Krishnan was the chief-guest in 1966 and Dr. Rajendra Prasad attended the 1951 convocation.

And now it was time for Mr. Kovind to add feathers to AMUs cap, but instead, a whole new controversy sparked following the news of Mr. Kovind’s invitation as Chief Guest.

It’s a quite self-understanding thing that the President is a Constitutional post and not a Political post. The President is above the nation’s politics and the post needs to be respected all the times irrespective of the person who’s holding that post.

A former Vice President of AMU Students’ Union in a statement given by him to the media, quoted President Kovind’s 2010 remark that “Muslims & Christians are alien to this Nation” & demanded an apology from the President for his previous remark. He also added that President of India will not be allowed into the campus at any cost as he’s a person of RSS mentality. Later he justified his statement by saying “he respects the post of President & he’s only opposing Shri Kovind and not the post of President.

An office bearer of the current Student Union also put forward his views, saying that any person belonging to the RSS will not be allowed into the University with the President of India.

Soon this statement of the former VP, spread like a forest fire among all the News agencies & got critical responses from numerous Political Leaders & Intellectuals.
Some media houses also branded AMU as a ‘Madarassa of Kattarwadi Soch’ due to the following opposition of President Kovind in the campus.

It must be noted that Shri Ram Nath Kovind was not opposed by the University or its students as a whole. Moreover, the University has been preparing for his arrival very enthusiastically. Some students also held a ‘Welcome March’ in respect of President Kovind’s arrival in the university.
But as for the petty TRP hungry Media houses & agencies, AMU remains a top spot for getting maligned due to obvious reasons!

Aligarh Muslim University has always been an example of the ‘Diversity in Unity’ of this great nation and has always been on the forefront respecting the ‘Ganga Jamuni Tehzeeb’.

Views or ideologies may differ from Student to Student but AMU as a whole has always portrayed a great example of being ‘Secular’.
As for now, the whole AMU fraternity is open to welcome Shri Ram Nath Kovind very enthusiastically at the university’s convocation.

Let’s await 7th March and of course AMUs heart winning hospitality for Shri Ram Nath Kovind, which will I am sure get Mr. Kovind crooning the AMU Tarana at the end of the function!