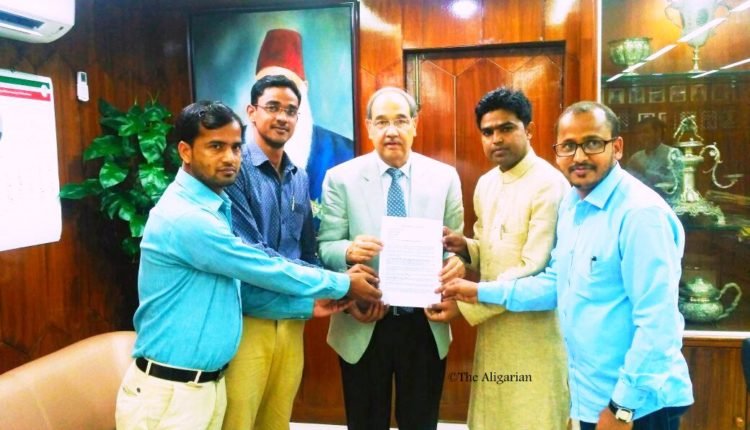 Ahead of President, Ram Nath Kovind’s visit to the Aligarh Muslim University for its convocation on March 7, university students have urged him to prevail upon the NDA government for granting “minority status” to the institute.
In a memorandum submitted to the President, through the university’s VC, Faizul Hasan on behalf of the students has said that President Ram Nath Kovind should consider the sentiments of the students’ community and help the university get the status of a minority institute.

We the students of this esteemed seat of learning are sure that the august presence of your Excellency will be a landmark in the glorious history of this prestigious institution.

At the same time, we would take the liberty to put for the following demands for the perusal of your esteemed Excellency.

It is on record that the Union government sanctioned a loudgetary allocation of Rs.349.5 Crores for the aforementioned study centers of AMU but till now only Rs. 130 Crores have been released because of which these centers are facing the paucity of Funds which is hampering their routine functioning.

Hence, you are requested to direct the Ministry of Human Resource Development to release the remaining budget for these centers at the earliest.

The Alig Fraternity suffered a setback when the present NDA Government withdraw the affidavit filed by erstwhile UPA Government in Supreme Court of India supporting the Minority Status of AMU.

We are hopeful that you will consider and understand the sentiments of the entire Muslim Community and will take up this matter with Union Government and will use your good office to convince the government to support the Minority Status of AMU in Supreme Court.

We take this opportunity to request your good self to direct the government to take effective preventive measures to stop these type atrocities and violence against Dalits & Minorities.

The recent bombing on Eastern Ghouta in Syria by the forces supporting Bashar Al-Assad has left hundreds of innocent civilians including children dead and thousands of them homeless.

We earnestly request you to direct the Minority of External Affairs to summon the Syrian envoy in India and convey him the concern of Indians that this bloodshed will not be tolerated anymore.

We also request you to provide the humanitarian aid to the affected people through the Indian Embassy in Syria.

We are hopeful that your Excellency will consider our plea and will take appropriate action at the earliest.

Thanking you in anticipation

“The issue of minority status of Aligarh Muslim University is a matter of life and death for the entire Muslim community as it is the very essence of the institute,” the memorandum read.
The students have also demanded that the President should instruct the union government to take effective steps to prevent atrocities and violence against Dalits and Muslims. “It has been observed that during the last four years there had been a considerable increase in organised violence in form of mob lynching and surge in violence against Dalits, minorities and other marginalised sections of the society because of which there is a prevalent fear among the Dalit and minorities,” the memorandum said.

They also demanded the release of funds for the AMU centers at Murshidabad, Kishanganj, and Mallapuram which are currently facing a huge financial crisis due to non-allocation of the total sanctioned budget of Rs 349.5 crore for these centers. Till now, only Rs 130 crore has been released.

On behalf of Alig community, former president of the students union, Faizul Hassan requested the president to provide humanitarian aid to the affected people in Syria through the Indian Embassy. He said, “We are hopeful that he will consider our plea and will take appropriate action at the earliest.”