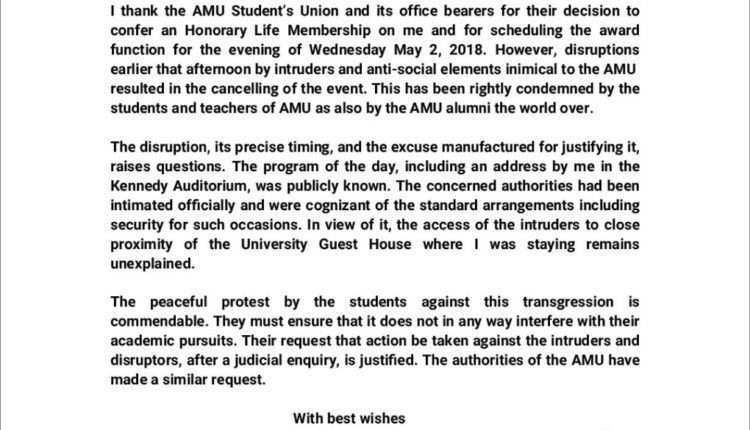 As the protest and movement in Aligarh Muslim University regarding the Police attack and right-wing religious group’s entry and violence inside the campus reaches double digits in a number of days, one of the most important person in the series of events, former Vice President Mr Hamid Ansari, has spoken out.

In a letter addressed to the President of AMUSU, Mr Maskoor Ahmed Usmani, Mr Ansari confirmed the breach of the his security, and congratulated the Students’ Union for the organisation of the the peaceful and democratic protest that has been going on from the 2nd of May, when he was there to receive the award of lifetime membership of the AMUSU, demanding action against the breach of security of the former VP’s security, the violence by Hindu Yuva Vahini’s members, and the policemen that were complicit in that attack.  They raise demands against the district administration questioning how a handful of goons could enter the campus, that too when Ex-Vice-President was within 200 meters of the place, taking a walk in a nearby guest house?

Until now, the mainstream media has tried hard to divert this narrative as AMU’s inclination towards Jinnah’s ideology and anti-nationalism, despite the students claiming time and again that they are protesting against such unlawful intrusion and the attack on unarmed students by the police. But now the Ex-Vice President has came forward and confirmed the breach of his security on 2nd May 2018.
In his letter, he elaborates, “… the disruption, it’s precise timing, and the excuse manufactured for justifying it, raises questions. The program of the day, including the address by me in the Kennedy Auditorium, was publicly known. The concerned authorities had been intimated officially and were cognizant of the standard arrangements including security for such occasions. In view of it, the access of the intruders to close proximity of the university guest house where I was staying remains unexplained.”

Further, he congratulated the students, by writing that the peaceful protest by the students against this transgression is commendable and their request that action be taken against the intruders and disruptors, after a judicial enquiry, is justified.

The AMUSU has welcomed the show of support by Mr Hamid Ansari, and expressed gratitude for the same, while also apologizing for the cancellation of the function where he was supposed to be awarded the lifetime membership of AMUSU.

for any Request Mail us at [email protected],