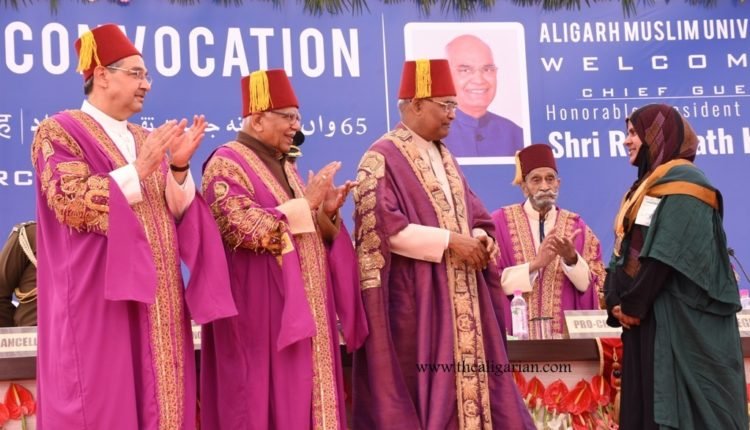 At the Annual Convocation of AMU, female students outshone male counterparts. Out of 218 medal recipients, 122 were female students while 96 were males. A total of 5, 381 degrees were awarded to 2891 graduates, 2094 postgraduates, 25 M Phil students and 371 Ph.D. candidates. President of India, Shri Ram Nath Kovind said that it is heartening to see that female students are leading the medals tally in AMU. He added that these students will take the country forward to the path of progress and their voice is a modern India.

“AMU students, who are awarded degrees today and the students who will be awarded degrees in future, are Bharat Bhagya Vidhata, and they will take India to new heights with contributions in nation building,” said the President.

The President further said that progressive women like Ismat Chughtai and Mumtaz Jahan have added to the luster of Indian society and of AMU. He referred to the commendable example of Khushboo Mirza, a former student of AMU who has played a key role as a scientist in ISRO’s Chandrayaan Mission. Achievers like her are role models for women in the 21st century, said the President.

The President was happy to note that AMU’s work in the field of science and technology is responsive to the needs of our society. The Centre for Advanced Research in Electrified Transportation is helping to develop useful technologies. He said that such efforts need to be enhanced in other departments of the university so that knowledge and innovation can keep pace with changes in society. Along with science and technology, enlightened, modern thinking is necessary to ensure every section moves ahead amid equality and fraternity, said the President.

Rector of the University, Shri Ram Naik (Governor, Uttar Pradesh) said that on the eve of International Women’s Day (March 8), female students have bagged 56 percent of medals for their academic excellence.

He further said that today women are making their marks in all aspects of life. “Women are part of all professions including the elite Air Force and other defense services,” said the Shri Naik.

Prof Mansoor added that AMU is making big progress with the establishment of solar plants, generation of clean electricity, District Early Intervention Centre and Paediatric Cardiology under NHM and cath-labs among other achievements. He further said that the university also has a new Olympic size swimming pool.

Addressing the graduating students, the Vice-Chancellor said: “You deserve accolades for hard work and now it is your duty to represent AMU Tehzeeb (Culture) by becoming loving and caring human beings and the best professionals of your fields.

Prof Mansoor urged students to serve the motherland in the best of ways. “Move ahead in life with ideas of nation-building and academic excellence,” said the Vice Chancellor.

The deans of AMU faculties received undergraduate, postgraduate and research degrees of students.

Prev Next
No Comments
Leave A Reply
Cancel Reply