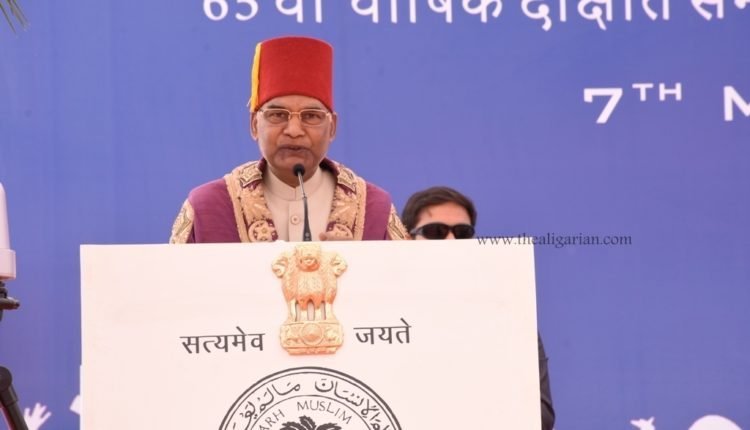 The eminent Aligarh Muslim University today held its 65th Annual Convocation with great zeal & enthusiasm. This convocation of AMU was quite special as the Chief Guest for the Convocation was Shri Ram Nath Kovind (His Excellency President of India). It was after 32 years that a serving President of India was at AMU to add more glory to its illustrious history.

The programme started with the recitation of verses from the Holy Quran.

He also talked of AMUs recent developments and advancements in the field of Medical & Technological Sciences.

He further presented some of the developments that AMU has made including the establishment of Solar plants, District early intervention center & Paediatric cath-labs.
He added, that the varsity now also has an Olympic size Swimming pool.

Prof Mansoor also urged the Students to move ahead in life & make AMU proud with their excellence in various fields.

The Controller of Examinations, Prof. Mujib Ullah Zuberi called out the names of the respective Deans of Faculties and the Deans received undergraduate, postgraduate and research degrees on behalf of the students.

Harsh Gupta, B.Tech (Mech. Engineering) and Sana Saud, (BUMS) received their respective medals from Shri Kovind for their excellent achievements in the field of academics. They both also delivered speeches.

Shri Ram Naik (Governor of Uttar Pradesh & Chief Rector of AMU) while delivering his address, remarked that it’s his 5th Convocation among the universities where he has been invited since Shri Kovind took the charge of President.

He also said that AMU has always been a great seat of learning.
He furthermore presented some facts about the Male-Female ratio at Aligarh Muslim University and concluded that girls have outshone boys in academic excellence.

He also focused on how the Nation is developing ahead & how the women are marching ahead in all the sections of society.

His Excellency Shri Ram Nath Kovind came to deliver the Convocation Address with a huge round of applause from the students.

He started his address by reminding that by virtue of him being the President of India, he’s also the Visitor of 140 central universities & institutes of national importance. He also said that he was also quite interested in visiting the Aligarh Muslim University as AMU has had a glorious history & has also been a seat of national importance.

His Excellency Shri Kovind remarked that he was quite surprised when he came to know that the Gown he’s wearing is 60 years old and it has been wore by C. Rajgopalachari, Dr. Rajendra Prasad, S. Radhakrishnan, Dr. Zakir Hussain & Dr. APJ Abdul Kalam. He added, that he himself feels quite honored to be present at the 65th Convocation of  Aligarh Muslim University.

AMU has always been at the forefront producing Reformists & Educationists that have contributed a lot in Nation-building and AMU students have proved themselves not only in India but around the globe said Shri Kovind.

His Excellency also added that there’s a never-ending list of AMU alumnus that have proved themselves in all the spheres of society including Bharat Ratna Khan Abdul Ghaffar Khan and anti-apartheid activist Dr. Yusuf Mohommad Dadoo.

Shri Kovind also shared an incident that made him surprised, when he was on his state visit to Ethiopia last year, he met the wife of the current Prime Minister of Ethiopia, Roman Tesfaye & she had also been alumni of AMU.

The President ended his address by saying that “We live in an age of globalization of building a world that does not just accommodate but celebrates diversity; Diversity that combines the best of modern technology with the traditions and cultures of our society to build the India of our dreams”.

The programme ended with the University Tarana followed by the National Anthem.