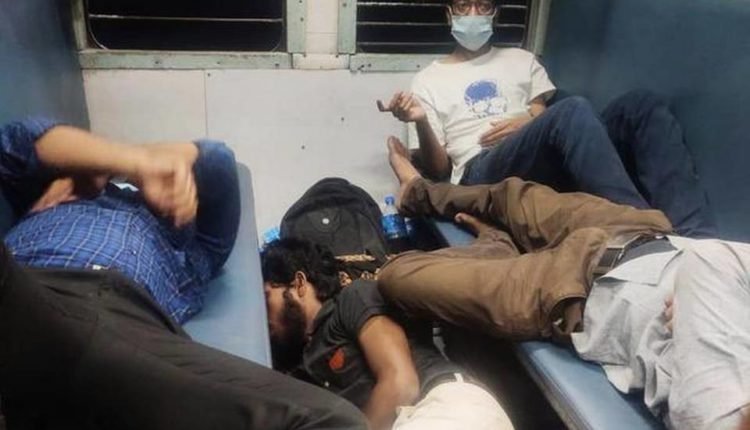 The Howrah-bound Aligarh Muslim University students were in for a shock when they found that they had to board general bogies in 04198 Mathura Jn-Howrah Shramik Special on Thursday evening.

“We were told by the university administration that the West Bengal government had made arrangements in the sleeper class for us. At the station, we were handed over tickets with ₹710 printed on them which is usually the price of a sleeper class ticket in a superfast train for this distance,” said Md. Farrukh, a final year student of political science, over the phone.

He alleged that they were promised five coaches but got only four. “Each coach has 18 seats and around 30-34 students. There is no way that social distancing could be followed. Male students vacated seats for female students and tried to sleep on the floor.”

“As a student of political science, we study about the importance of federal structure in our country, but I am realising how it works on the ground during this journey,” he remarked.

After the students tweeted and tagged higher officials in the West Bengal government and AMU administration, the train made a stop at Bilaspur in Madhya Pradesh and they were provided food and water, around 12 hours after they had boarded the train. But in the scorching heat, students were seeking cold water. “In 44 degrees heat, the water we got was undrinkable. We had to wait to let it cool,” said Ms Praveen. “This experience also made us realise first hand the plight of migrant workers, who can’t even tweet,” said Mr Farrukh.

Also, the students were under the impression that the train will go via Mughal Sarai but later discovered that it would go via Kharagpur and take 30 hours to reach Howrah.

When The Hindu spoke to the students on Friday evening, the train was about to reach Rourkela. “This was not communicated to us before boarding the train. We have been through Rajasthan, Madhya Pradesh, Chhattisgarh, and have now entered Odisha,” Baby Parveen, a student of master’s in ELT, who hails from Asansol, said.

“The bogies were not properly sanitised and we had to use sanitisers provided by the university administration. Many of us could not sleep the whole night and were feeling sick. Those who are keeping fast are feeling giddy. Once we ran out of water bottles that we brought with us, there was no provision for food and water,” she complained.

Shafey Kidwai, AMU spokesperson, said the Vice-Chancellor and the Registrar spoke to the Railway officials and urged them to make arrangement for food and water.

“As it was an arrangement made by the West Bengal government, we didn’t have much of a say. The university sent 210 students by buses to Mathura. Out of these, 70 students returned by the same buses to Aligarh as they didn’t find the arrangement up to the mark. But most of them were desperate to reach home by Id,” he said.

Mr Farrukh, who hails from Uttar Dinajpur, said none of their elected representatives took the calls but officials of the West Bengal government reached out to them.

“They expressed surprise over the fact that they were packed in general bogies and promised to provide relief.”

One of them was Naveen Chandra, a 2018 batch IAS officer, posted as Assistant Collector Malda.

“One of the students tagged me in a tweet,” Mr. Chandra told The Hindu. “It was not part of my official work. I just felt that they need to be helped. I called my colleagues in Odisha who found out that the train would halt in Rourkela. They agreed to provide food packets and cold water,” he said.

They were also contacted by nodal officer Prabhat Kumar Mishra who expressed shock over the arrangements and promised buses at Dankuni and Behrampur stations to take students to their respective districts in the State.

This Story was originally published by The Hindu