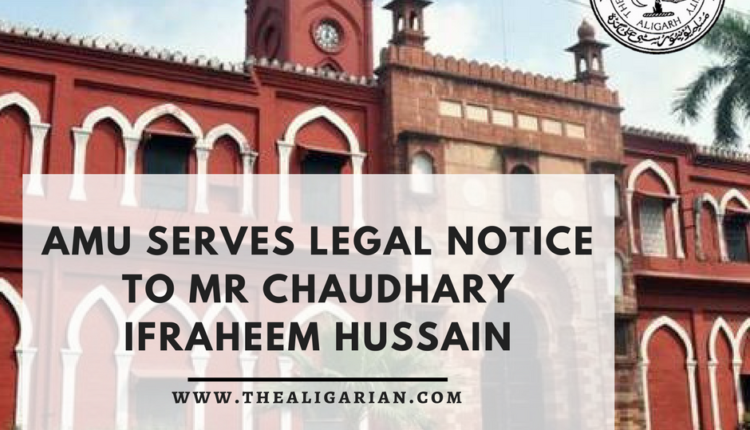 April 29: The Aligarh Muslim University (AMU) has sent a legal notice to Mr Chaudhary Ifraheem Hussain counsel for defaming the AMU Vice Chancellor and the University authorities through statements and quotes in various newspapers regarding the recent strike called by Resident Doctors Association (RDA) of the Jawaharlal Nehru Medical College (JNMC).

In the notice, AMU lawyer, Mr B S Kamthania stated that Mr Hussain made false and baseless allegations with an intention to defame the AMU Vice Chancellor and the University authorities. The notice holds Mr Hussain responsible for causing mental, social, spiritual and professional loss.

The false allegations have also hurt the integrity of University authorities and harmed their reputation, mentioned the notice adding that Mr Hussain is liable to pay damages for his statements and to be prosecuted and punished for the offence of defamation.

AMU has also asked Mr Hussain to reveal the source of his concocted statements and clarify as to why he made those derogatory statements. The University has also demanded that Mr Hussain should get an apology published within a week in the newspapers, which carried his statements against AMU authorities.

Through the notice, AMU categorically states that civil and criminal proceedings for recovery of damage will be initiated against Mr Hussain, if he fails to get an apology published.

AMU has earlier refuted the accusations of deaths due to negligence at JNMC during the RDA strike. The University had then clarified that senior consultants, senior residents and interns worked relentlessly and remained on duty in the OPD and various wards of the hospital during the strike period. AMU had also constituted a committee which found no negligence in the treatment of patients.

The strike was declared illegal by University notifications issued on 29/3/18 and 2/4/18 and Residents were asked to report to duty immediately.

It should be noted that the Allahabad High Court imposed a fine of Rs 50, 000 against Dr Sadaf Fatima, wife of Mr Hussain for filing repeated cases of such types related to the University.

We The Aligarian Team wish the University could have issued a legal notice for defamation against Subramaniyam Swami’s recent derogatory statement against AMU.

AMU to increase BALLB, LLM seats and Other AMU Updates