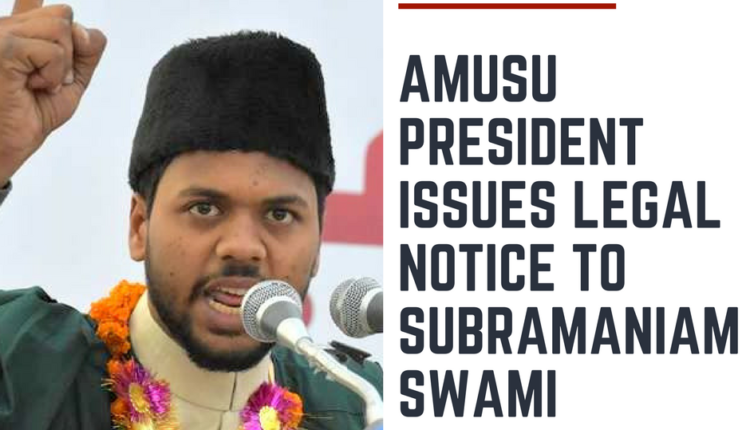 Addressing media persons on Sunday, Usmani said Swamy’s accusation has been mischievously designed to defame and malign AMU and to discredit it as an institution of higher learning. He said such comments adversely affect the prospects of university students.

Usmani called upon Swami to tender an unconditional apology within seven days of the receipt of the legal notice. “If he fails to do so, legal proceedings will be initiated against him,” he warned.

“We had urged him (Swamy) at an earlier the press conference to apologise for his statement but he didn’t do so,” said the AMUSU president He said AMU is an institution of national importance and many country’s heads/politicians/historians/scientists have passed out of it.

“Swami’s allegations have hurt the sentiments and shattered the confidence of students,” said Usmani, adding that the BJP leader has failed in his duty as a responsible parliamentarian.
The legal notice states that Swami’s statement smacks of a conspiracy hatched by him in pursuit of a hidden agenda to divide citizens and to jeopardize the future prospects of students of AMU.