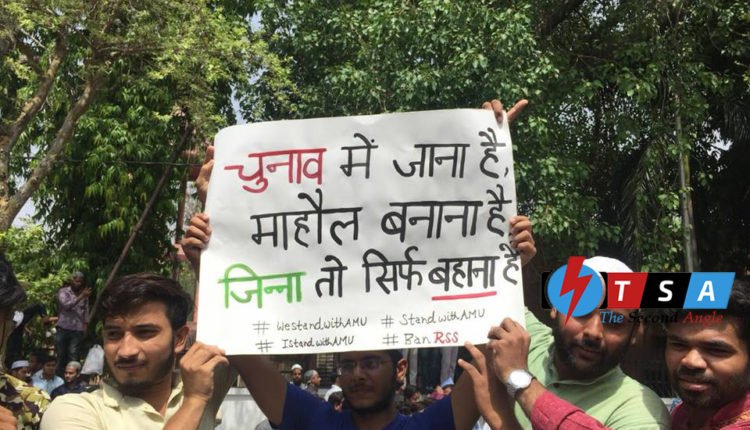 Series of attack by identical ideologies hit AMU this time.

On 2nd of this month, Honbl. Ex-Vice President of India Mr Hamid Ansari was to be felicitated with the lifetime membership of Aligarh Muslim University Students Union. Before attending the programme He was taking a walk in the garden of guest house number 3 (located 100m near the main gate of the university. – Bab-e-Syed) when some goons with arms hampered the security of Hamid Ansari. They attacked the security guards of the university and tried to get close to the guest house.

This is the first time such event has taken place in the history of AMU. The question is what forces encouraged them to take such a daring step?

Moreover, it was shocking that these goons were escorted by the local police force. More than 50 police officers were running around them to ensure their safe visit to the campus.

WAS IT PLANNED OR RANDOM?

This terror attack was going to be the final step of the series that started 5 days back when the local MP of Aligarh wrote a letter to Vice Chancellor of AMU on the subject of the removal of Mohammad Ali Jinnah’s portrait which was installed at AMU students union hall in the year 1938. The reason for hanging the portrait was same as of the visit of Hamid Ansari, for Mohammad Ali Jinnah was also facilitated by AMUSU and EC with the lifetime membership of AMUSU.

The letter by MP Satish Gautam got released in media before reaching the Vice Chancellor. The most interesting turn was when AMUSU rejected the demand of a local resident of Aligarh and member of RSS, to set up branches of RSS inside the campus. On this, the Rajya Sabha MP Subramanian Sway tweeted saying that “somebody needs to teach AMU a lesson”. It’s hard to believe that it was a mere coincidence that 12 hours later some goons of Hindu Yuva Vahini and Hindu Jagran Manch attacked AMU.

MP Satish Gautam was also a member of AMU court but he never questioned about Jinnah’s portrait before the news got viral that his ticket for 2019 Loksabha elections is in danger. (No doubt that he came forward on the sayings of Subramanian swami to please him)

REACTIONS OF AMU STUDENTS AFTER THIS ATTACK:

The felicitation programme of Hamid Ansari was immediately cancelled due to the breach in security and failure of district administration to provide him protection.

6 of those goons were caught by AMU Proctor team and students. AMUSU office bearers handed them to local police but unexpectedly the police took no action and allowed them to go without any investigation. AMUSU and AMU students peacefully protested by standing near university gate and some students leaders went to police station to file an FIR against the goons. The station in-charge denied lodging an FIR against the attackers. AMUSU requested the police officers thrice for filing an FIR without any crowd and political pressure. After watching this behaviour of police, AMU students decided to march peacefully to protest against the attack and for the biased behaviour of the police.

ILLEGAL ATTACK OF POLICE AND RAF:

On the way to file an FIR, the police started lathi charge on students. None of the AMU students had any weapon and was protesting peacefully without harming any policeman and local residents. The lathi charge was not legal and it was clear that it was planned. The ATTACK of POLICE on students was brutal like It was on criminals instead of students. Many senior students got injured – AMSU President Maskoor Usmani got unconscious for 2 hours when a RAF officer hit him on his neck, former VP of AMUSU S.Mazin Zaidi got more than 8 stitches on his head while another student and court member of fac. of life science was beaten so brutally that he was unconscious for 5 hours. Approximately 30 students got badly injured and are still recovering. Meanwhile district admin. ordered to shut down internet services for a day in Aligarh.

The students of AMU clearly stated that they are protesting against the brutal attack of police on innocent students, the attack of goons on university security guard and the violation of security of ex VP of India and attempt to attack on him. But media houses for the sake of TRP showed that AMU students are protesting against the issue to take down Jinnah’s picture from the union hall. stating AMU students as protector or follower of Jinnah is incorrect.

JINNAH IS A HISTORIC FACT OF AMU, NOT FAITH.

Students of Amu since 2nd may are on a peaceful protest against the attack of police an RAF on students and attack by goons on AMU.

AMUSU has proposed its demands:

AMU IS RECEIVING STRONG SUPPORT FROM MORE THAN 20 UNIVERSITIES AND ALL THE ALUMINIS AROUND THE GLOBE ALONG WITH TEACHERS ASSOCIATION FROM SEVERAL UNIVERSITIES.