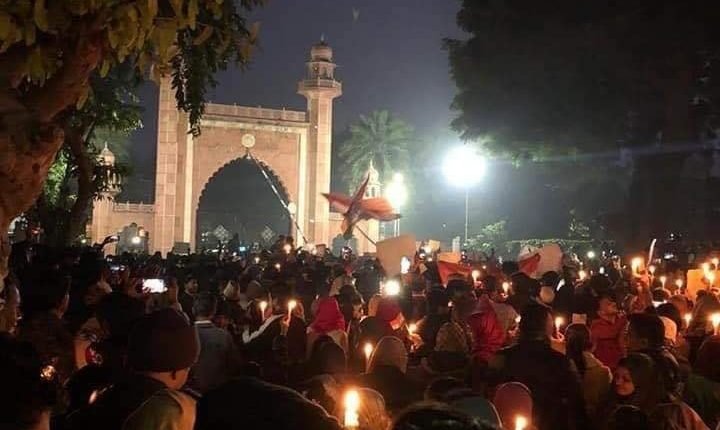 Even the chilling 8 degrees of temperature couldn’t stop thousands of students of Aligarh Muslim University by showing their opposition for CAA and NRC when they came together on road with candles in their hands, national flag held up chanting ‘NRC ko wapas lo (Take Back NRC)’, ‘Chhatr ekta zindabad (Hail Student Unity), & ‘Hum kya Chahte? AZAADI (What do we want? FREEDOM)’ on 23rd of December, 2019.

The Vice-Chancellor of AMU has given the orders to vacate all the hostels earliest by 16th of December 2019. This leads to an appreciable deadlock in the university campus. However, the revolution never stopped on social media despite facing a week’s shutdown of the internet. This can be clearly witnessed how a mere social media post inviting students to join in candle march from Chungi Gate to Bab-e-Syed turned into a humongous crowd of around 5000 to show their solidarity, despite hostels being empty.

The occurrence was successfully organized and led by senior students. Later a memorandum was presented. They call off a day with AMU Tarana. Clearly, students are enraged with both vice-chancellor and registrar for allowing police to enter into the campus and attack students so brutally that a student lost a hand (just index finger remaining) hit by a stun grenade. More than 52 students have been charged with FIRs under serious charges. They demand answers on the administration responsibility and high-level enquiry by the Supreme Court.