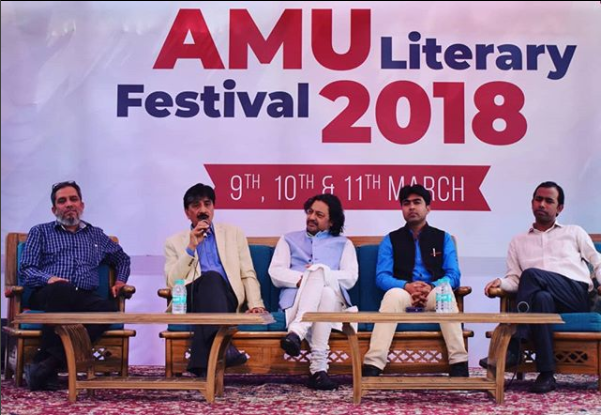 Aligarh, 9/3/2018: The Aligarh Muslim University Literary festival 2018 was inaugurated here today by the roving editor of The Telegraph, Sankarshan Thakur in the Kennedy Auditorium.

The programme started with the recitation of the Quranic verses by Qari Mohammad Arif.

F.S. Sherani, Coordinator of the Cultural Education Centre (CEC) officially welcomed everyone. He extended his gratitude to the guests and appreciated the students for their efforts.

This was followed by the annual report presented by the secretary of the University Debating and Literary Club, Aasif Akhlaque and presented the achievements of the club members in various national literary events.

Afterward, the AMU Literary Festival was declared open by the chief guest, Sankarshan Thakur followed up with his lecture on the topic, ‘the necessity of speaking’.

In the very words of the chief guest,

“If you stop to speak, if you begin to tolerate, you are doing yourselves the greatest disservice.”

He expressed his happiness on being invited to the event and talked about having counter-narratives and healthy competition. He went on to add the importance of constructive and positive journalism in the present scenario. He also laid emphasis on the necessity of citizens to raise questions and duty of those in power to answer them. In his words, “if in a democracy you have a man ruling the nation who does not submit himself to a single question, it’s very disturbing.”

He expressed his concern over the growing fake news culture on the social media.

In the context of freedom of speech and press, he said, “the most dangerous thing about dictatorship is not it’s dictator but those who submit to dictatorship.”

The guests inaugurated the newsletter of the event titled ‘LitLetter.

The event was concluded by vote of thanks delivered by the president of the club, Mohibul Haq.