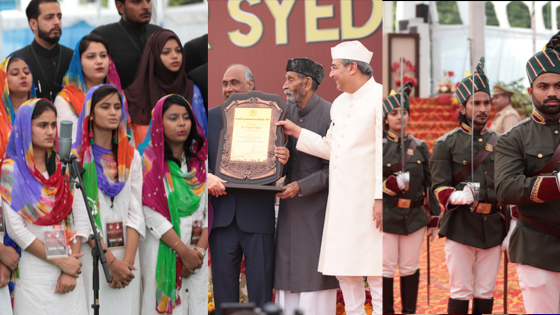 He arrived for the celebrations at the Athletics Ground in an iconic four-wheel Victoria horse-drawn carriage. AMU Vice-Chancellor, Professor Tariq Mansoor accompanied the Chief-Guest to the venue, where they were received by Riding Club members.

The Sir Syed Excellence Award in international category was given to the Oxford Centre for Islamic Studies, Oxford University, UK. Darul Musannefin Shibli Academy of Azamgarh secured the same award in the national category.

Furthermore, the Vice-Chancellor, Prof Mansoor conferred the Innovation Council Awards to faculty members; while the Pro-Vice-Chancellor, Prof Akhtar Haseeb gave the Young PhD Scholar Awards. The Chief Guest, Dr Islam handed over the prizes to the winners of the All India Essay Writing Competition.

Sir Syed was the torchbearer of education for the Muslim community in the Indian subcontinent. He formed AMU as Mohammedan Anglo-Oriental College way back in 1877 and it received the university status in 1920. Since then, it has produced numerous Scientists, Politicians and Scholars. AMU alumni are all over the world, who also celebrates this day at their respective alumni associations.