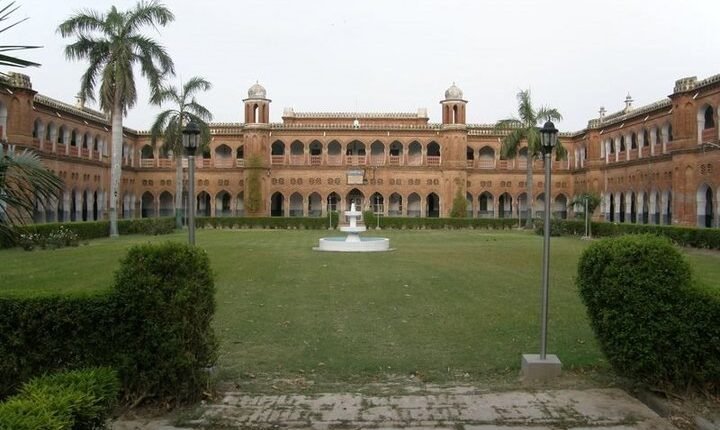 At every level, Aligarh Muslim University provides an excellent education. So let's take a look at AMU's schools.

At every level, Aligarh Muslim University provides an excellent education. So let’s take a look at AMU’s schools.

For boys and girls, the University operates one elementary, seven high schools (including one for the Visually Challenged), and two senior secondary schools. Courses in Indian, Oriental, and Western languages are also available at the university. The University’s primary medium of teaching is English.

Also Known as the Minto Circle. The School upholds high moral and traditional values which essentially make the Aligarh Muslim University and institution of academic distinction and difference. Discipline, excellent behaviour, and obedience to the School’s rules and regulations are all mandatory for all students. Not only that, but the school has kept its national character since its establishment. This School’s alumni have excelled in a variety of professions and have played important roles in social, political, and cultural life on a national and international level.

The School is the University’s feeder institution for higher education. Students have access to tutorial/remedial classes and counselling. Our students are also exposed to the outside world as part of a tour or excursion. Students also have access to games/sports and opportunities for creative activities, as well as swimming and gymnasium club facilities and other amenities available to university students.

The fundamental goal of founding the school was to give girls in general, and Muslims in particular, an opportunity to participate as equal players in the country’s development and advancement. In all domains of knowledge, modern education is provided at the AMU Girls School. Currently, around 2500 female students in grades I through XII are enrolled. The AMU Girls School provides sports facilities and other amenities to its pupils, as well as a Dispensary for the girls’ health care.

The school’s scope and range of activities have been consistently growing. The school has actually delivered on its promise and dedication to achieve the highest degree of academic success. Academics, public service, film, athletics, and NCC are just a few of the areas where the School has excelled. The University also provides hostel services to outstation students admitted through an admission exam at the Allama Iqbal Boarding House of Senior Secondary School, which is located on the school’s campus.

Aligarh Muslim University’s Senior Secondary School (Girls) is one of the most prominent institutes serving the needs of girls’ education. In Class XI and XII, the School offers Science, Commerce, and Humanities Streams. The admission to class 9th and 11th is made on the basis of an All India Test conducted by the Aligarh Muslim University. The school aspires to provide quality education to girls, supported by a modern curriculum and state-of-the-art technology, in accordance with the Ministry of Human Resource Development’s resolution to promote Women Education and Empowerment of Women.

The School grew from a small Primary School that opened in the Society Garden in the last year of the nineteenth century. The school began to expand and grow with the passage of time and the University’s efforts. In 1992, the school, which had previously been a part of AMU City High School, was granted independent status in order to promote this growth. The vast majority of people in this section are financially and educationally disadvantaged. The school’s top objective is to encourage pupils to pursue higher levels of education and extracurricular activities.

7. Ahmadi School for the Visually Challenged

It is a co-educational institution that provides free education to visually impaired students using advanced scientific methods and cutting-edge teaching practices. Students must be computer literate in order to excel in their future occupations, according to their technology ideology. Students are needed to use and build new computer abilities on a regular basis in order to present their mastery of ideas across the curriculum. Computer Typing, Instrumental & Vocal Music, Handloom Weaving, and Chair-Regaining are some of the other vocational programmes offered at the institution.

Founded with the intention of teaching Urdu and imparting lessons in the recitation of the Holy Quran to the children of University grade IV employees as well as educationally underserved parts of the Muslim community. On December 22, 2011, the UGC authorised the transfer of ABK Union High School to AMU as a regular secondary school, marking a watershed moment in the school’s history. They provide pupils with opportunities to learn about cultural heritage and the rapidly changing technology environment.

The school was founded with the intention of teaching Urdu and providing lessons in the recitation of the Quranul Majeed to the children of University grade IV employees as well as educationally underserved sectors of the Muslim community living near the campus. In 1998, all of the school’s eighth-grade pupils were permitted to take the AMU Board Examination as private students. The Girls Section has been assigned Mohd Habib Hall, where a new building for the Girls Section has been constructed.

According to the Abdullah School, schools are influential in determining a student’s interest, habit, character, and overall personality, as well as laying a good basis for superior education. The Nursery School’s continuous success persuaded the university authorities to decide in favour of beginning primary programmes (up to class V) with effect from the 1959-60 academic year. The school only accepts students in Class I who pass the university’s common entrance exam. The school only accepts children of University employees as students.

The Battle With School Closure, Digital Divide, And Learning Void In The Post-covid-19 Education System In India. – The Second Angle

The Scope Of Commerce Education In India – The Second Angle