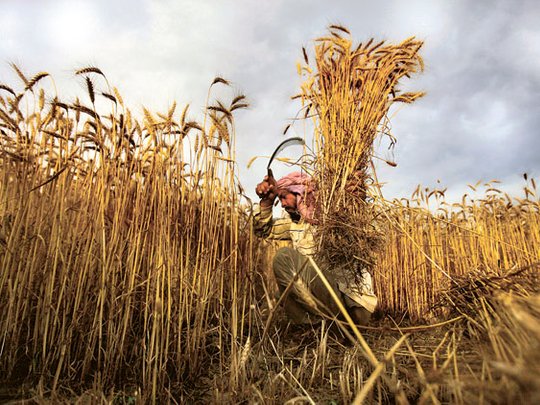 The Green Revolution, A Blessing That Became A Bane – The Second Angle


In reality, there’s an even deeper reason for this lack of trust by farmers in the farmer’s bill.

60 years back the government took countermeasures against the growing feminine in the country.

The step was what we now know as the ‘Green Revolution,’ it was referred to as a period of incorporation of technology in agriculture to increase crop production and involved the use of high yielding variety (HYV) seeds, irrigation facilities, tractors, fertilizers, and pesticides.

In India, it was mainly led by agricultural scientist M. S. Swaminathan.

Even Though the Green revolution was an attempt to increase the fertility of the land, still mankind tried to change the course of nature.

Nature has its unique way and when men try to deviate from it, there are consequences.

Even if it looks helpful and progressive when humans tend to change its course, nature ultimately bites back.

The antagonistic impacts of the Green Revolution in India

The use of fertilizers and pesticides in an uncontrolled and inappropriate manner led to water pollution and ultimately the demise of beneficial flora and fauna.

The soil fertility gradually depleted due to over usage and caused soil degradation.

Further, dependence on few major crops led to the decrease of crop biodiversity in India and the extinction of indigenous varieties.

Particularly talking about Punjab and Haryana, where the former is cited as the Green Revolution’s most celebrated success story, the picture is no longer rosy.

Over time, the pests grew immune to pesticides.

In desperation, farmers increased the usage of pesticides and the excessive use contaminated not only the air, soil, and water table but also exposed plants and humans to the threat of adulterated pesticides.

The price paid by Punjab for the advancement of food technology includes The price Punjab has paid for food security comprises cancer, renal failure, stillborn babies, and birth defects.

The rural and small-scale farmers have received the short end of the stick when it comes to making money in the course of the Green Revolution.

Many of them fell into the web of poverty and the Green Revolution cost them their jobs.

Increased competition and failure to establish themselves in the market led the farmers to sell off or mortgage their land.

In many regions, even the government sided with the large-scale farmers and further impaired the growth of small-scale farmers.

This trend has caused an increase in the suicide rates in rural areas, especially in Punjab.

According to a 2019 news report, India has witnessed the death of more than 900 farmers in Punjab due to indebtedness.

India is known for its regional diversity, it has deserts, mountains, and plains. Yet this diversity has been one of the downfalls of the Green Revolution.

These regional inequalities led to the concentration of benefits in the irrigated and high-potential rainfed areas.

Since the HYV seeds needed a lot of water for their growth, the application of this new technology in the dry-land areas was simply ruled out.

Due to this reason, initially, states like Punjab, Haryana, and Western Uttar Pradesh, etc. having good irrigation sources and other infrastructure establishments were able to gain the benefits of the Green Revolution and achieve faster economic growth.

While other states recorded slow growth in the agricultural division.

Considering the widespread hazards of the Green Revolution it is high time that the government looks for sustainable alternatives.

The aftermaths of the Green Revolution have come under consistent global scrutiny.

The negative impacts of the Green Revolution have become a growing concern.

The range of benefits should be shared with all and measures should be taken to decrease the intensified economic gap between farmers.

Essential Tips On How To Prepare –

What Is Academic Writing? Its Advantages, Tips, And Suggestions –