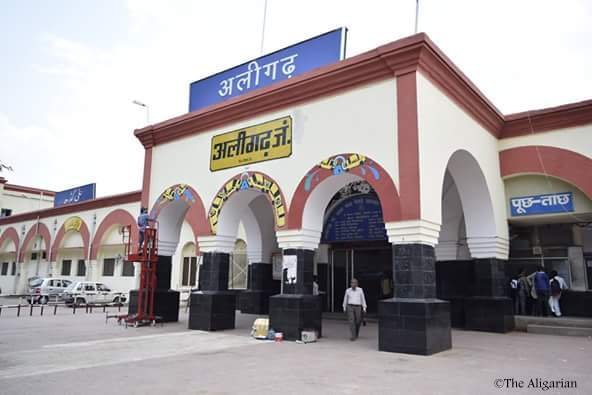 By Affan Ahmad On Dec 17, 2017
2
Share
Advertisements
Aligarh, located in the Doab region of Uttar Pradesh, situated 120 km’s away from the national capital Delhi and 300 kms away from the state capital Lucknow. Called as the ‘Mecca of Education’ and the ‘City of Locks’, this city has much more to experience and discover than a normal tourist can think of! So let’s gets started!
Getting Here :
Getting here wouldn’t be a difficult task for anyone as Aligarh has a well-connected Railways and Roadways system.
By Air –
The nearest International Airport is the Indira Gandhi International Airport, in Delhi about 140 kms. From there, one can easily get a paid Cab and reach Aligarh in 3 hrs.
By Railways –
This city is well connected to all the major cities of North India by Railways. The Aligarh Jn. Railway Station is also expanding currently.
By Roadways –
Aligarh has a brilliant Roadways network connected to it. The 8-lane Yamuna Exp Highway connects it to Delhi & Agra and the recently build Agra-Lucknow Expressway has made it more convenient for anyone from Eastern UP to visit Aligarh.
Getting Settled :
For any tourist visiting Aligarh, Hotel Palm Tree would be the most prime choice of course. Its the best Hotel in city, a premium 3-star Hotel, Restaurant & Banquet. Located 1 km away from the City Center and 3 km away from AMU, this remains the best choice for staying in Aligarh.
Getting Around –
For anyone visiting Aligarh, it is strongly recommended for one to take a whole tour of the Aligarh Muslim University (AMU) campus firstly. The beautiful campus of legendary AMU spreads across 400 Acres. Besides AMU, there are a no. of historical and cultural Sightseeing places in Aligarh.
Here are some of the Places which are a must if you visit Aligarh! –

Bab-e-Syed: This is the main gateway to Aligarh Muslim University and the most picturesque location of Aligarh. Built in the Indo Islamic style of Architecture with Pietra-Dura carvings on it, this one’s a must visit!

Sir Syed House: Perhaps the hub of Photography in Aligarh, this used to be the house of Sir Syed Ahmad Khan, the founder of AMU. The house is now Museum and contains various past Reminiscences of Sir Syed & his associates. Besides this, is a relaxing garden where one can go and enjoy Nature.

K.A. Nizami  Centre for Quranic Studies: Situated in the Sir Syed House Compound itself, a very beautiful mosque which presents a colossal and compelling view to the visitors. It’s an architectural beauty.
The building of this Centre has been designed by the world-renowned architect Professor Abdel Wahid Al-Wakil, recipient of the Agha Khan Prize for Architecture (UK).

This compound is home to several Historical monuments i.e. Victoria Gate, Strachey Hall, Jama Masjid, Nizam Museum & Lytton Library. For history geeks, this place’s a must as this is the place where one can get to know the history of the great Aligarh Movement. It’s the place from where the MAO College started in 1875 and later became the AMU in 1920. These buildings are built in British India and are of Semi Mughal Architecture. Now, this compound is a full-fledged Residential Hall known as the Sir Syed Hall, where students of AMU reside.

Maulana Azad Library: The Central Library of AMU, named after first Education Minister of India Maulana Abul Kalam Azad, this is the largest library in Asia with over 1.3 Million books. A random stroll through it, would be nice if someone visits Aligarh.

The main Auditorium of AMU, perhaps calls it an architectural masterpiece. With a capacity of 2000 people, this Auditorium is home to various Cultural & Musical evenings organized by Cultural clubs. You would be lucky if you get to witness any Play or Musical Evening here during your stay in Aligarh.

If you’re an Archeology enthusiast, this is the place for you!
Containing numerous archaeological objects like sculptures, carved stone pieces, concrete panels, Acheulian tools and Terracotta Figurines which Sir Syed preserved during his lifetime. This Museum is home to Sculptures and Terracotta Figurines which date back from 3rd Century B.C. to 11th Century A.D. The botanical collection like Fossils dates back to 300 million years ago!

Art Enthusiasts, if you’re here, You’re at the right place! This little compelling Art Gallery will give you the real artistic feeling. MAAG also organizes numerous Art events and Exhibitions, if you’re lucky enough you can catch up one!
The history of MAAG dates back to the year 1928 when Prof. Moinuddin Ahmad got constructed this Gallery in AMU Campus. His vision was to disseminate the art of painting in Aligarh.
It was reinaugurated in 2013 by the then Vice Chancellor of AMU, Lt Gen Zameer Uddin Shah.

Clock Tower:
This is the main Clock Tower of the city, popularly known as the “Ghanta Ghar” by the locals. It is similar to that of “Big Ben” in London in terms of Architecture.
Shekha Jheel Bird Sanctuary:

This Bird Sanctuary and Lake have a lot to offer, especially for a tourist in Winter Season. Birds from Russia and Central Asia migrate here every winter. It’s a very beautiful picnic spot, frequently visited by the locals for a refreshing time in the bounty of nature, Situated at GT Road around 11 kms from the City Centre, this is a must visit for Nature lovers!

The Annual Cultural Exhibition, popularly known as Numaish, is held at the Exhibition Ground in January and February every year. The cultural shows take place at 3 grand stages (Kohinoor, Krishnanjali, Muktakash). In all more than 150 stage events featuring artist from across India takes place during a period of 28 days. From traditional food and textile stalls to Celebrity performances, it has a lot to be experienced. This Numaish is not just merely an event, this is a culture which runs through the bloodstream of every Aligarh resident. The festive environment of that 1 month just can’t be explained! A visit to this exhibition is a must if you’re in Aligarh in Jan/Feb to get the real feel of this event.

Again a place for history lovers, the Aligarh Fort has a lot to be discovered. This Fort is now in ruins and stands on a hill. It is the work of the French engineers under the control of de Boigne and Perron. The fort was built by Muhammad, the son of Umar who was then the Governor of Koil (Aligarh) during the reign of Ibrahim Lodi. Also, the Battle of Aligarh between the French and the British was fought here in 1803. This would be a great place for someone who wants to relive History, so if you’re in Aligarh, try to at least get a stroll through it!

As its name tells, the City Centre of Aligarh, this can be called as the “Times Square” of Aligarh. From multi-cuisine Restaurants and Food chains to branded multinational Clothing stores, the relishing aurora gleams from every corner of this heart of the City. If you’re looking to spend a glamorous evening, this is the place you’re looking for!

If you’re looking for that traditional Indian old & clumsy but happening marketplace experience, then you need to be here! Similar to that of Chandani Chowk of Delhi, a big mosque “EidGah” welcomes you here! With mouthwatering Non-Veg food stalls in every corner and traditional old shops, the rejoicing and happening atmosphere awaits you!

Aligarh is known for its Non-Veg Mughlai foods. Being in the Nawabi state of Uttar Pradesh, You can find some really good Non-Veg dishes out here at a very reasonable price. The Major Restaurants are in Centre Point location which is considered as the posh market of Aligarh. Moti Mahal, Fazle Kareem, etc. But if you want to Explore the local taste, Go for various roadside Dhabas such as near Tasveer Mahal and Purani Chungi area. And you can food almost round the clock in Rasal Ganj area of Aligarh.

Dodhpur, is one of the main Food Streets of Aligarh. Food just lives in the Atmosphere of here, you cannot find better Non-Veg food than here anywhere else. Restaurants and Food stalls are here, in every corner where you can experience the premier restaurant type experience as well as typical roadside eating experience. As soon as you’ll enter here, you’ll be just lost in the mouth-watering aroma of Lebanese Shawarma and Seekh Kebabs. This is surely a must visit for Foodies!

Chai : Chai is not just merely a drink in Aligarh, it’s a culture, it’s a tradition that lies within! No morning or evening can be without Chai in Aligarh.
So if you’re in Aligarh, be ready to explore various roadside Tea Stalls all around the city, especially in Zakariya, Chungi, Shamshad Market, and Tasveer Mahal area.
So the readers, this is our Aligarh!
A city with an essence of something different, something astonishing and something relishing that lies within it!
A city with a touch of Culture, Tradition, Heartiness, and Glamour!
A city that needs to be discovered and explored!
The Elegance, The Aestheticism and The Heritage of Aligarh gleam from every single corner of it and reflects it’s acquaintance.
Someone Great has rightly composed a few lines in the grandeur and magnificence of Aligarh which very beautifully depicts it’s presence:-